Putting the Canadian Association of Petroleum Producers above Canada CFN – There are many economic gains to be made in exploiting the Tar Sands, and limited production could actually benefit Canada and go a little towards assuring our future in an increasingly uncertain world. But there are also many major short term gains to be […]

CFN –  As I sit here in the very early hours of the last day of 2011 I’m looking back at what was an interesting ride.    2011 probably won’t go down as my favorite year.  A lot of personal changes in life; becoming single again at my advanced age; moving,  finding out how odd […]

CFN – I really really am enjoying the Ottawa Senators this year.   They’re way over achieving, but it’s not a fluke.  It’s character and putting in 60 minutes a game.   And it’s never giving up.   The Sens were down 3-0 to the Calgary Flames Friday night to start the second period when […] 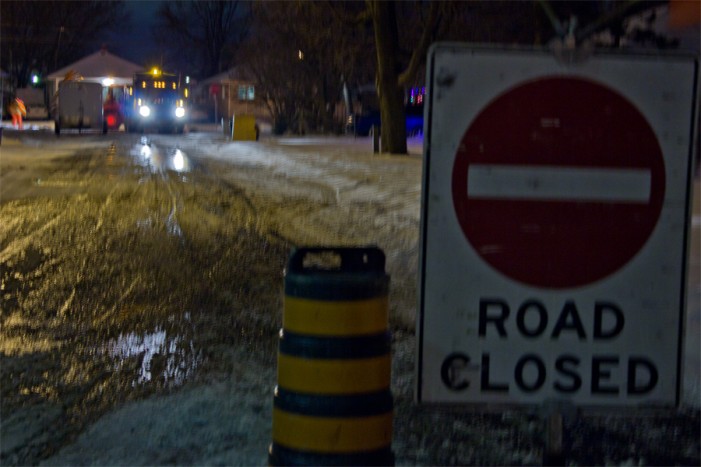 CFN – Shortly before 10:30 this evening, just about the time the ice rain started to blanket the area, city workers began digging at the intercection of Dover Road and Osborne Avenue in the older section of Riverdale.  The area is closed to all but local traffic for a two block radius.  Drivers are advised to use […]

CFN – Here is your Police Blotter for the Cornwall Ontario area for Friday December 30, 2011. COMPUTER REPAIR SCAM ALERT               Cornwall, ON- The Cornwall Community Police Service would like to inform the residents of our Community of a computer repair scam. It is reported that the culprit(s) contact the victim by telephone and […]

CFN – Reflecting on some of the images and words shared on line concerning peoples’ Christmas celebrations and the amount of “stuff” involved in such a holiday I cannot help but ask myself, “What the heck are we doing”.  Human consumption whether for survival or for having the “latest model” of something is affecting the […]

CFN – As the Christmas season is upon us, I have been privilidged to have the opportunity to taste all the traditional Danish Christmas dishes.Leading up to Christmas, it is very common to have some Christmas “snacks”, which are called “Æbleskiver” and “pebernødder”. Æbleskivers are very similar to Timbit’s. Although, while it may look like […]

CFN – For whatever reason, many of us have become interested in who our ancestors were. I became interested a few years ago so I purchased a copy of the “Family Tree Maker” and began filling in the blanks. I also registered with Ancestry.ca and started a notebook with information and pictures I got from […]

Letter to the Editor – Joe Hueglin of Niagara Falls Ontario on Egypt, Syria, and Iran – December 28, 2011

Dear Editor, In a year end interview with Prime Minister Harper this was reported regarding Syria “He doesn’t foresee a military intervention in the near future because there is not ­ as there was with Libya ­ a United Nations resolution authorizing such action.” Strangely though Egypt and Syria were included in the interview article, […]

CFN – Sometimes you just have to make those first key saves and set the tempo emotionally for a game.   That’s what Carey Price did as Montreal survived an early onslaught by the Ottawa Senators before he Habs woke up and started popping pucks in the Sens net.    Montreal whupped Ottawa 6-2 giving […]

CFN – Pilot Dan Baz is answering your flying questions here on the Cornwall Free News. If you have a question about flying you can email Captain Dan or post below. Question On landing I heard the engines power up again yet the airplane is braking. Why does the engine power go up ?  I thought […]

CFN– Much Tease, on Cornwall’s downtown Pitt Street, is one of relatively few area small businesses that are set for expansion in the New Year. Owner Greg Mooney, who has run the store for the last twenty-two years, is confident about the future despite the slow economic climate that is affecting other Cornwall businesses. “We’ve […]

Your Cornwall Free News Photo of the Day from Gerald D Wood – December 26, 2011

CFN – Our Cornwall Free News Photo of the Day is from Gerald D Wood of Cornwall Ontario.  He took this shot while out walking his beautiful dog Mika near the Power Dam. If you wish to submit your photo or video of the day email us at info@cornwallfreenews.com

Which of the two is the more powerful in their own country: Stephen Harper or Barack Obama? by Stéphane D. Groulx – December 26, 2011

CFN – Right before the holidays, as I was writing my final exam for political science in one of those giant lecture halls at the University of Ottawa, one of the essay questions I had to write about intrigued me. It asked us (the students) to argue who between the Prime Minister of Canada and […]