Cornwall ON – Our retiring MPP, Jim Brownell is a huge advocate for the arts, and on Thursday September 8th from 5-8PM the Centre culturel de Cornwall at 124 Anthony St will be displaying some fine works at their vernissage and then the works stay on display until September 30th!

Dear editor,       Acccordimg to the comments published in your news paper, we have to conclude that eastern Ontario is  well on its’ way back to the cave  whence we came.       The mindlessness, the selfishness, the overt bigotry and ignorance,  all evidence that our society is regressing.  The great concern for French visitors […]

CFN – There has been much media speculation this past week about potential merger talks between the Liberals and the NDP, but it is simply too early for them. Neither side is ready for a merger Both parties have not yet reached the point that the Canadian Alliance and Progressive Conservatives were at in 2003. […]

Your City Hall Bulletin for Cornwall Ontario for Thursday September 1, 2011 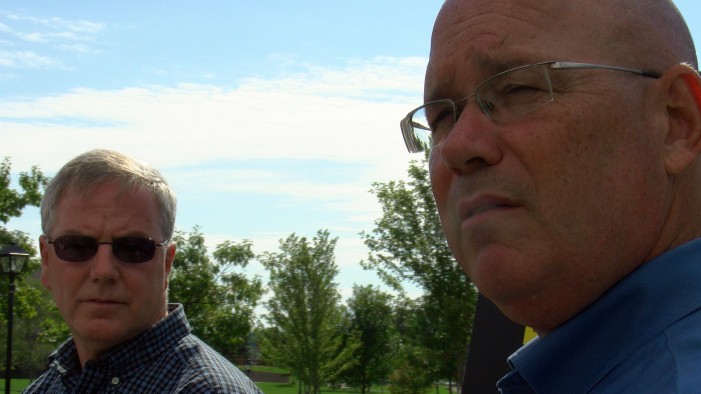 Cornwall ON –   PC candidate Jim McDonell and MPP Steve Clark were in Cornwall today; Lamoureux Park specifically to unveil their new carnival wheel!   Or as Mayor McDonell called it, “The Wheel of Tax” It was an interesting display focusing on their explanation that the McGuinty government raised taxes during a recession on […]

Cornwall ON – When Mark MacDonald cut the ribbon to open his campaign office tonight, it spoke a lot about the man and his down to earth nature. The “Ribbon” we cut was the red tie he wore to his nomination meeting. It was soiled while he was cleaning up after the event but he […]

Letter to the Editor – Jeff Nielson of Olds Alberta on The Canadian Wheat Board – August 30, 2011

Editor of The Cornwall Free News Sir, I’d like to respond to Joe Hueglin – Niagara Falls, Ontario letter of Aug 29 in your paper. As an farmer elected Canadian Wheat Board Director in District 2, I am continuing on the drive for marketing choice for producers in western Canada. The Canadian Wheat Board Act, although […]

AKWESASNE MOHAWK TERRITORY- In response to an article published on August 19, 2011 in the Ottawa Citizen, the Mohawk Council of Akwesasne questions Canadian Ministry of Public Safety Vic Toews’ encouragement of private citizens to bear arms, the suggestion to close the Cornwall Port of Entry altogether, and the article’s comparison of “tribal outlaws” and […]

CFN – Have you heard about the Keystone XL pipeline?  There is a proposal on the table to transport approximately 900,000 barrels of thick, synthetic crude oil to Texas and the Gulf States from Alberta for refining.  If approved, this would mean an expansion of the world’s dirtiest and most environmentally destructive form of oil […]

Cornwall ON – Here are the kitten pics for the ad. There are five:  2 black w/ white tummies and paws (1 male and 1 female) 2 greyish black (females) 1 mixed (female) They will be ready to go in 2-3 weeks but they can be reserved now.   No whim or impulse adoptions please.   Looking […]

Cornwall ON- It’s that time of year again , when the children and teenagers will be heading back to school. The Cornwall Community Police Service is looking for your help in making the return to school a safe outing for our children. We are requesting that all motorists keep a watchful eye on the children [...]

Ottawa ON – Sadly I couldn’t make it to Ottawa last week for the Jack Layton ceremonies, but luckily some of our viewers and contributors did. Carilyne Hebert, a long time NDP activist locally sent in the following:   Jack was a role model to me. He stood for everything I believe in; social justice […]

Lib Candidate for SD&SG Unveils Third Pillar of his Campaign – Healthcare and how it Effects Seniors – August 29, 2011 – Cornwall Ontario

Letter to the Editor – Joe Hueglin of Niagara Falls Ontario on Harper Government and the Wheat Board Decision – August 29, 2011

Ask Captain Dan: What happens if I get sick while flying? Our Resident Pilot Answers Flight Questions.

Toronto ON – Pilot Dan Baz is answering your flying questions here on the Cornwall Free News. If you have a question about flying you can email Captain Dan or post below. Question People get sick and have medical problems  in shopping malls, restaurants, buses, trains etc.  What happens if someone gets sick on a long […]

Should Internet Peeps have to sign their names when leaving Comments on Websites? August 28, 2011 – Cornwall Ontario

Cornwall ON – It’s been a weird and wacky week dear viewers of The Cornwall Free News, and I have an odd conundrum that I thought I’d share with you and ask your opinions? It’s not easy being a small independent online newspaper.    A lot of chores and never enough resources which is why […]

CFN – Ontarians will be able to count on house calls from their family doctors and nurses under a new Ontario Liberal plan, London North Centre Liberal Candidate Deb Matthews announced today.   “House calls are coming back to Ontario so anyone who has difficulty getting to appointments will be cared for right in their […]