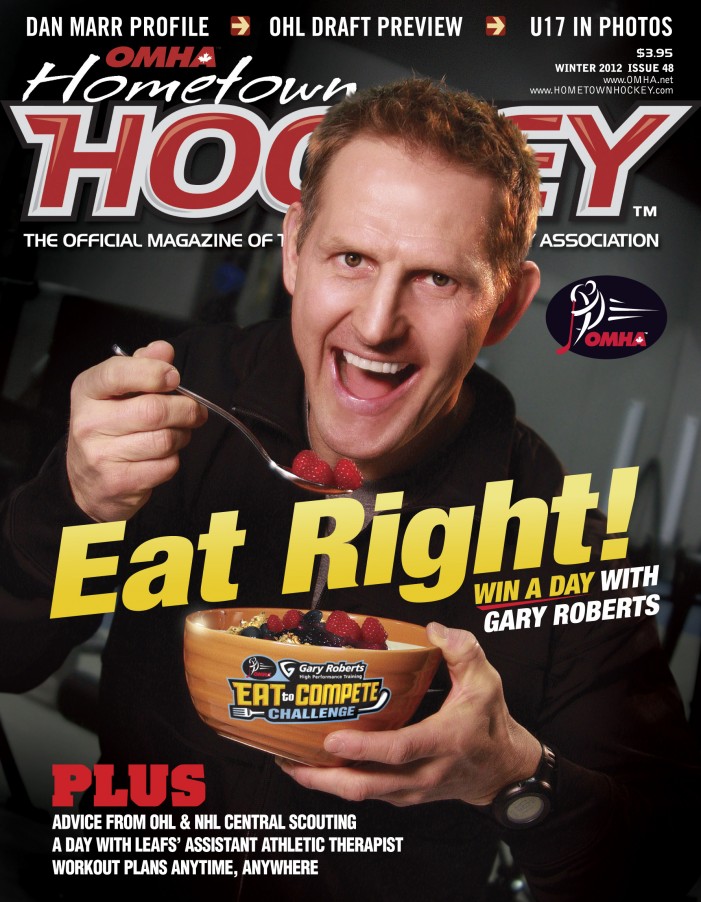 CFN– The Ontario Minor Hockey Association (OMHA) teamed up today with a famous NHL alumni and launched the Gary Roberts Eat To Compete Challenge, a contest to help OMHA players to develop better nutrition habits for a healthier approach to hockey and life.

The OMHA and Roberts launched the challenge at the Gary Roberts High Performance Centre at the Fitness Institute in North York, Ontario. The contest details are published in the March 2012 issue of Hometown Hockey Magazine, the OMHA’s membership magazine, which is arriving at members’ homes this week. Hometown Hockey goes out to 100,000 family households and is read by 340,000 players and families each issue. The magazine is also available online www.hometownhockey.com and the contest details online at www.hometownhockey.com/garyroberts.

OMHA players on participating teams will follow and track their healthy eating over a 10 week period starting on March 1st, earning points for their good eating and discipline. Players that earn a minimum of 500 points will have their names entered into a draw and there are three prizes: the grand prize winner will receive a prize for their entire team, including a day of education and training with the former NHLer at the Gary Roberts High Performance Centre at the Fitness Institute in North York, Ontario, and a nutrition seminar led by Roberts and Nature’s Emporium. Their day at the centre will also be the subject of a feature in Hometown Hockey Magazine, and they’ll walk away from the event wearing free OMHA gear.

Roberts, a graduate of the OMHA’s Whitby Wildcats, had a great NHL career that almost ended at the age of the 30 when he suffered a broken neck. He turned to exercise and diet to heal and surprised many with a comeback that saw him play another 12 years. He’s now an expert in the areas of sports training and nutrition. Now he advises some NHL current stars including OMHA graduate Steven Stamkos on nutrition so they optimize what their body can do on the ice.

“Players want to compete hard on the ice to chase that NHL dream,” Roberts said. “Healthy eating plays a huge role in building a body that can compete harder and faster. There are foods that will give a player a natural edge to do more, both on the ice and in life.”

To help players and their families put together a menu plan, Roberts and Hometown Hockey have published the Gary Roberts Grocery List and Recipe Book along with videos on preparing meals which can be found at www.hometownhockey.com/garyroberts.

“We are thrilled to have Gary’s commitment and expertise to help our players eat and be healthier,” said the OMHA President Joyce Junker. “The players who compete will develop healthier lifestyles, and that’s why we are running this competition. We want all of our players to be healthy, and to enjoy playing hockey the rest of their lives. We hope the lessons learned from this competition will benefit our players and families in the years ahead.”

This contest is only open to players from teams that are in the OMHA.

There are three team prizes in the contest.

Grand prize winner and his or her team receive:

◦    Including a dynamic Warmup, Workout and Cool-down