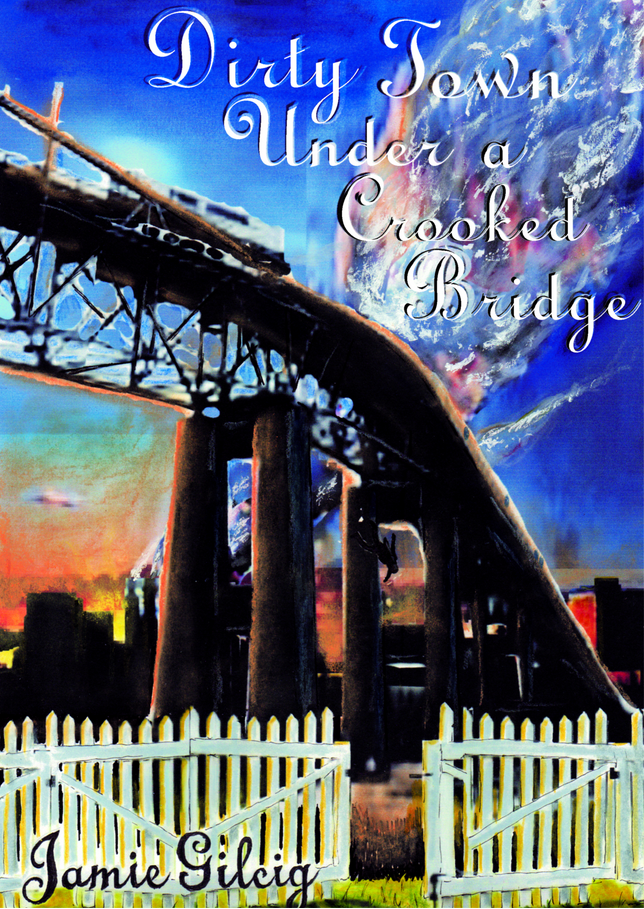 CFN – Here is your latest excerpt of Dirty Town Under a Crooked Bridge!   Thank you everyone that keeps pestering me to finish this damn thing!

I get so little time to work on this project and just keep flipping through pages.

Here goes and feel free to post your comments below.

The flames licked the sky.  I had never seen anything like this in person.   On TV yes, on the net yes, pictures yes, but to feel the heat, see the madness on the people pressing to get closer and smell the smoke of ages and history were, well exciting.

Firemen and police were holding people back.  It felt like the whole town came out to watch and the marsh mellow jokes and Jewish Lighting jokes were echoing through the mob.

Laughter tickled the humid night air, and screams when something exploded from within.  It seemed as though every person in the crowd had their own theory or knew something that the one next to them didn’t.

I caught the eye of one of the firemen that had given me some great quotes at another fire and caught up with him.  He seemed really upset.

“Fucking Urban Renewal?  Can you believe that hairy bastard said that!”   The sweat trickled down Bobby’s face.  He’d been a fire man a long time and never played politics which is why he never rose in the ranks. He didn’t play by Cornwall rules, but his own and his dedication as a fireman was respected even by those who had little respect for themselves or others.

Bobby had dreamed as a kid of becoming a fireman.  He zoned in and nobody ever doubted that he’d become one which he did at a young age.    It was his rush, saving the day and seeing the last flame sputter to a cold death.

Now the veins were popping in his neck as he strained on a heavy hose while walking; sweat dripping down from under the visor of his helmet.

He stopped for a second and took in a breath.  Then another.   Exhaustion was written all over him.

“You work hard training all your life and get told to lay down.   It was bad enough when they forced his retarded son into the department, but to have us lay down and call it urban renewal?  I’ve seen a lot of shit in this town over the years, but this is just so fucking wrong.”

As he said that a fireball burst into sky and crowd roared.  It was better than fireworks.   I said  “Why pay to demolish a building and deal with code when you can just burn it down?  Did you notice the demolition trucks are already here?”

I watched Bobby’s face tighten.  He made like he was going to say something and then some inner energy grew with him.  He squeezed the hose hard and yanked it forward.

“I’ll talk to you at the Curling rink.   I have to finish this farce.”

I watched Bobby walk back into the wall of flames with his hose hanging limply; impotent, a sad little boy in a middle aged man’s body, angry at the world and one particular man who destroyed his  vision of what his job and life were all about.

What could I do?  I couldn’t write about any of this.   Nobody would go on the record.  None of this would ever come out except over hushed voices over too much beer in dark sports bars or garages.

That’s when I say Fuzzy talking on his cell phone.   He loved his tech gadgets and was yelling into it.  As I edged closer I started to hear him.

“It’s almost over.  Nothing will be left…. stop it…everything is under control…no problems….tomorrow it’ll be like the building was never there.”

I thought to myself.   Like it was never there.   Two hundred years of history gone.   Cornwall had about the fewest old buildings of any city in the region.   Compared to Brockville and Kingston it was spooky.

“No, you can’t.  You know I don’t talk to you and your fucking paper.   I thought you were run out of town?”

“No, that’s not for another month.   I got another residual cheque and have met this really hot nurse.   I may never leave.”

His eyes glared at me.   He refused to speak,but would not turn his gaze until I backed down.    The utter arrogance of the man rippled through the air.

“Can you tell me how the fire started?    Was anyone hurt?    Why was the demo equipment already on site?  Is it true you forced the fire department to fudge your son’s test scores to get him hired?”

I wanted to ask him six more questions, but instead smiled up at him.   He blinked, turned his back and vanished in the crowd and smoke.

I won this one.  Yes there’d be a price to pay.  This was Cornwall.  You never won.  Even if Fuzzy fell Fuzzy junior would replace him.  In the meanwhile Fuzzy would make my life hell, or at least hectic.

It was a stacked deck and the dealer had long greasy fingers.

It was Cornwall.  It’s how everyone liked it.  And nobody cared or ever would.

If you liked this excerpt and want more please like or share this on facebook, tweet it and of course leave your comments of praise.  We writers can be very vain and you cheap bastards got this for free!   🙂

Special thanks to artist Jay Schwartz for his amazing test covers.  I’m hoping that he comes out with a third one for us soon!

Your Latest Excerpt of Dirty Town Under a Crooked Bridge – The Big Fire! LANGUAGE ALERT – PROFANITY WARNING added by admin on February 16, 2013
View all posts by admin →

13 Responses to "Your Latest Excerpt of Dirty Town Under a Crooked Bridge – The Big Fire! LANGUAGE ALERT – PROFANITY WARNING"