Cornwall, On – Jeffrey Goulet, 47 of Cornwall was arrested on April 3rd, 2014 and charged with failing to appear for prints. It is alleged that on March 31st, 2014 the man failed to attend police headquarters for a scheduled appointment to have his finger prints taken. As a result an investigation ensued. On April 3rd, 2014 the man attended police headquarters to deal with the matter. He was taken into custody, charged accordingly and later released to appear in court on April 22nd, 2014.

Cornwall, ON – Peter Laxton, 36 of Cornwall was arrested on April 3rd, 2014 and charged with five counts of mischief under $5000, two counts of theft under $5000, fraud under $5000, attempt fraud and breach of probation for failing to keep the peace. It is allege that sometime during the evening hours of April 1st. 2014 and early morning hours of April 2nd, 2014 the man gained entry into five separate vehicles that were parked at a Sydney Street parking lot by way of breaking the vehicles’ windows. Police were contacted and an investigation ensued. During their investigation it was learned that the man also used a credit card that was stolen from one of the vehicles and attempted to use it on a second occasion. On April 3rd, 2014 the man was spotted by police walking in the area of Second Street and Sydney Street. He was taken into custody, charged accordingly and held for a bail hearing.

Cornwall, ON – Shane Sarault, 21 of Cornwall was arrested on April 3rd, 2014 for having breached his conditional sentence order and also charged with threats. It is alleged that on April 3rd, 2014 during a meeting with probation he threatened to harm a probation officer’s children. Police were contacted and an investigation ensued. During the investigation the man was taken into custody, charged accordingly and held for a bail hearing.

Cornwall, ON – Adam Albers, 26 of Cornwall was arrested on April 3rd, 2014 and charged with breaching an undertaking for having consumed alcohol and failing to keep the peace. He was also charged with breaching an undertaking for failing to abide by house rules and failing to keep the peace. It is alleged that on April 3rd, 2014 police were called to a Marlborough Street address in relation to a disturbance call. Once on scene they located the intoxicated man in his room. He was taken into custody, charged accordingly and transported to police headquarters where he was held for a bail hearing.

(North Dundas) – On 03Apr14, at approximately 5:30pm, SD&G OPP officers responded to a report of a break and enter on County Road 1, North Dundas Township.

The investigation revealed that sometime during the day unknown suspect(s) attended a residence and removed a Laptop, IPad, computer tower and various items of jewelry.

Four persons were arrested and will attend a show cause hearing on April 3rd, 2014.

All the males were charged with 2 counts of:

CC 92(1) – Possession of Firearm knowing its Possession is Unauthorized

Police are seeking the public’s assistance identifying a man responsible for a number of thefts from employees and customers of local businesses.

He identifies himself as a member of Toronto Fire Services, or an official from an insurance company, checking on the status of the fire extinguishers, smoke detectors, and sprinkler systems. Once permitted entry into restricted areas, he is reported to have stolen personal property of staff members and customers.

Police now have a security camera image of the suspect.

Anyone with information is asked to contact police at 416-808-1400, Crime Stoppers anonymously at 416-222-TIPS (8477), online at www.222tips.com, text TOR and your message to CRIMES (274637), or Leave A Tip on Facebook. Download the free Crime Stoppers Mobile App on iTunes, Google Play or Blackberry App World. 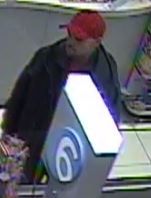 Above: Security camera image of suspect in Fraud/Theft investigation