Will Chicken Bob Kilger Cross the Road And Enter the Mayoralty Race in Cornwall Ontario? June 10, 2014 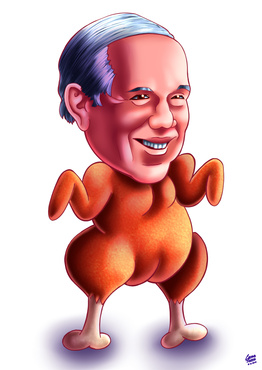 CORNWALL Ontario – Pat Finucan confirmed to CFN that he will be Mayor Bob Kilger’s campaign manager for re-election.   He also confirmed that he would not step down as Chair of the Police Board while doing so.  He said he spoke to someone; although he didn’t state who that someone was?

Maybe it was Bob? Mr. Finucan (not Funican) as Claude McIntosh spelled the former Dean of St. Lawrence College and runner up to Mark A MacDonald for the Liberal nomination in the last election. Many have asked why the scandal plauged and conflicted Kilger has waited this long to cast his name on the ballot as Mr. McIntosh had made an earlier prediction that failed, and now has stated that “Chicken Bob” will put his name on the dotted line after the Provincial election on June 12th.

The question should be asked is whether his doing so is based on the out come of the election and if so why? So far there is only one announced candidate for mayor, CFN Editor Jamie Gilcig whom Mayor Kilger has already refused to debate and refuses to speak with. The Mayor has been sued and upcoming court date is pending regarding Kilger’s hitting of a panic button because he didn’t like the Editor’s T Shirt.

Mayor Kilger and veteran councilor Glen Grant have now triggered a closed meeting investigation after a complaint was filed with Stephen Fournier regarding an incident at a recent Waterfront Committee meeting where the Mayor and Councilor voted to move in camera clearly in violation of the Municipal Act in spite of them already being instructed by Mr. Fournier this term over the exact same issue.

We’ll find out soon enough whether Chicken Bob will cross the road and enter his name into the race with or without Ms Wynne as Premier after June 12th.

Will Chicken Bob Kilger Cross the Road And Enter the Mayoralty Race in Cornwall Ontario? June 10, 2014 added by admin on June 10, 2014
View all posts by admin →

39 Responses to "Will Chicken Bob Kilger Cross the Road And Enter the Mayoralty Race in Cornwall Ontario? June 10, 2014"