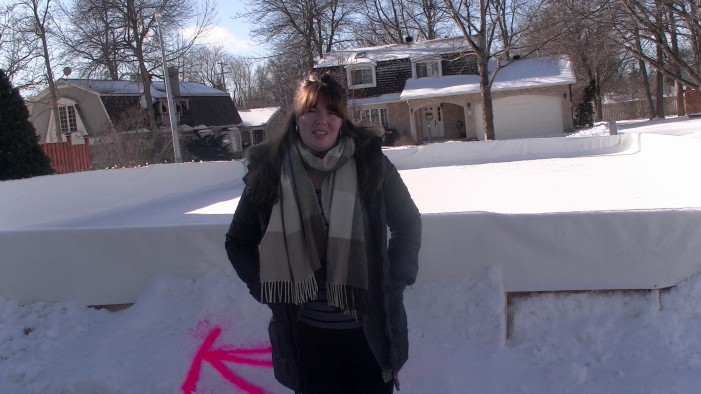 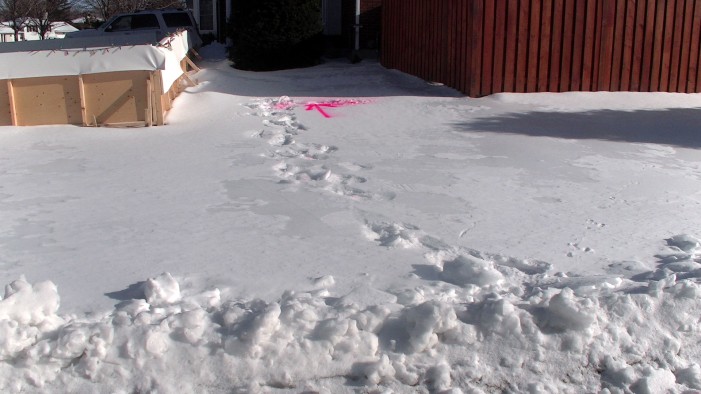 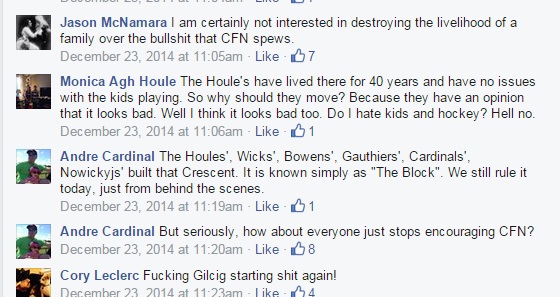 CORNWALL Ontario – Ugly politics have led to a city directed truck starting to tear down the Vincent family ice rink in Cornwall Ontario.  Manager Bill De Witt who was present said it was on direct orders of Mayor Leslie O’Shaughnessy and CAO Norm Levac. Laura Vincent was teaching at school when City By Law Officer Joel Lemire phoned her to tell her that city vehicles were coming to tear down her rink.

When CFN and Mrs. Vincent arrived the city had already painted marks for the back hoe. Shortly after a back hoe arrived and cleared snow around the rink up to the pink hash marks.

The truck left and City Manager Bill De Wit arrived and explained that on orders from Mayor Leslie O’Shaughnessy and CAO Norm Levac the city was to tear down the boards. (and bill the Vincent’s)

Mrs Vincent was upset as previously Mayor O’Shaughnessy had clearly stated that they could have up to an extra week.  As well, with the help of councilor Mark MacDonald they had applied for a minor variance.

The Vincent’s received a notification, but city staff were off for the holidays.   This being the first day back for many the tear down order was already in place.

There’s been a certain political meanness to this process similar to Beavergate where the city refused to hold a moratorium of beaver trapping in a city owned nature park.   At that time their response was to move the deadly conibear kill traps next to the beaver lodge wiping out the family.

In fact one of the family members of “The Block” posted this on facebook. Kinda makes it sound more like a US inner city than one of the most expensive neighborhoods to live in Cornwall.

This after it was alleged that former councilor Glen Grant helped file the complaint to pull the rink down.

Mr. De Wit stated that they would hold off until Levac spoke to Mrs. Vincent regarding the minor variance.  CFN will update with video as soon as it’s loaded.

Mrs. Vincent has informed CFN that CAO Norm Levac has denied her minor variance and is sending in the trucks.

The Vincent’s have posted on facebook that they are taking boards down tonight and asking for help.  They are hoping to avoid the city coming back and billing them and have also vowed to sell their home and leave the city.

UPDATED City Of Cornwall Ontario Brutally Send In Trucks To Take Down Vincent Rink JAN 5, 2015 added by admin on January 5, 2015
View all posts by admin →