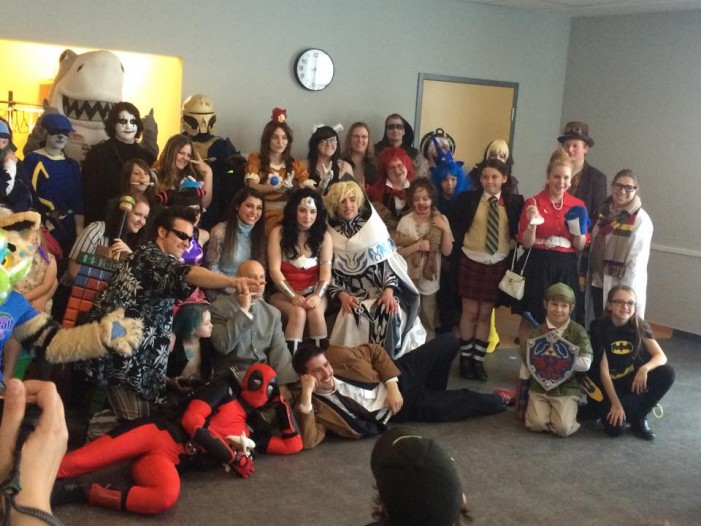 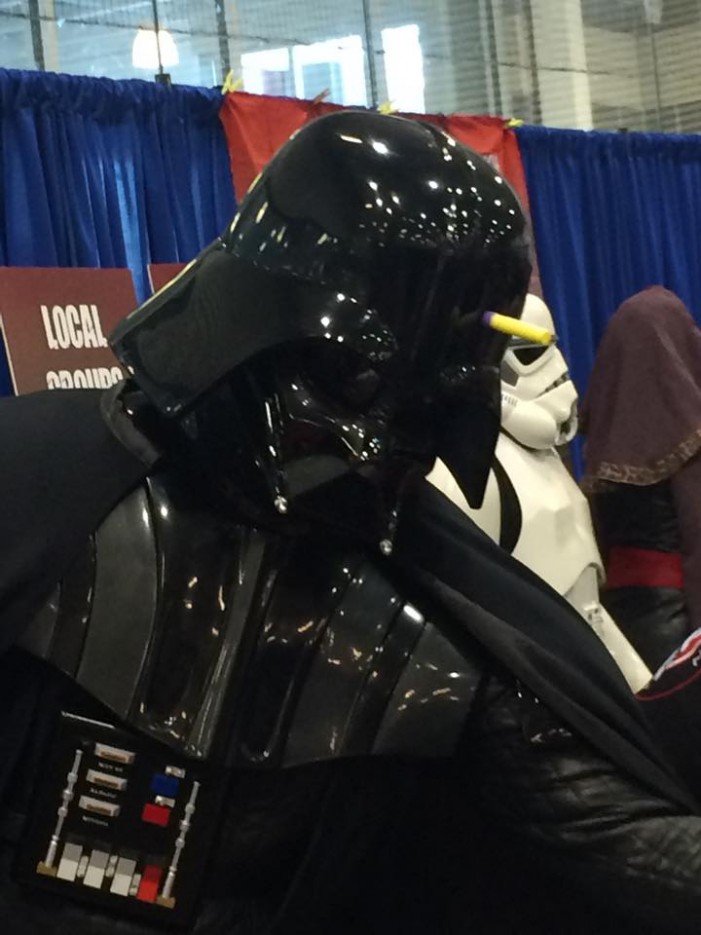 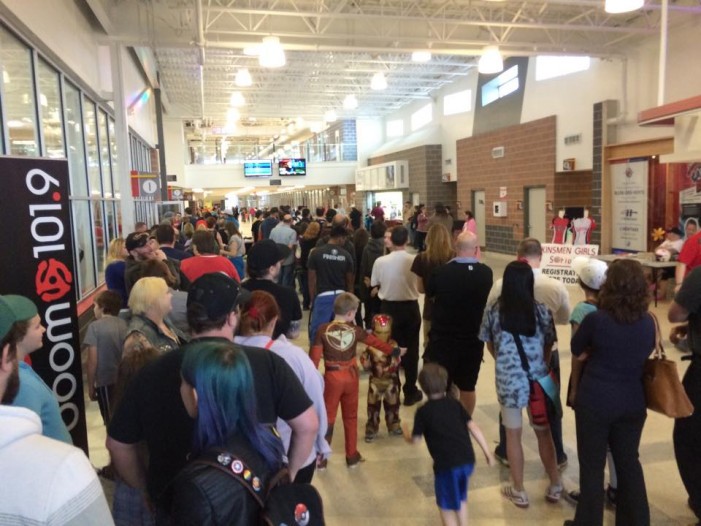 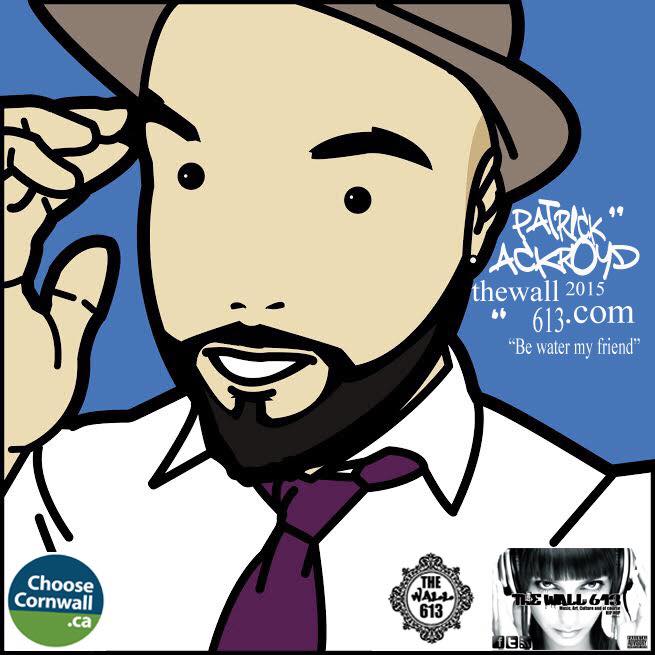 CORNWALL Ontario – I am a regular customer and hang around guy at Fantasy Realm in Cornwall. I have so much love and respect for what Randy Sauve does for our community. When I heard Randy and Carol Grant were putting on a local Comic Book Convention at our Benson Center I instantly bought tickets for my daughters Isabella and Victoria. We support our community as a family and I knew that this was an event with great potential for our City.

A Comic Book Convention or Comic-Con is not an event dedicated solely to comic books. It is an event for Pop culture in general. A place for Musicians, Actors, Writers, Artists and entertainers to connect with their fans. The coolest part of a Comic-Con is the people that dress up to these events. Where else in the world do you get to see grown people dressing like Batman and Superman? We enter the gates of The Cornwall and Area Pop Event (CAPE) and wait in line with what seemed like a thousand people, waiting in anticipation to see something amazing. I am clearing my phone out so I can take as many pictures and videos as possible when we see Lady Deadpool standing in line. I am a huge Deadpool fan and my Daughters were pretty excited to see a female version of this Marvel Comic legend. I walk right up to her and ask if I can take a picture of her with my daughter. The smile on my daughters face was priceless.

THE Canadian Youtube Legend Toronto Batman is walking through the lineup and getting people either amped or uncomfortable with his Christian Bale Batman voice. I scream out “MY PARENTS ARE DEAD!!” and he looks over at me and says “your awesome”. I tell my kids that they now have to listen to me because Batman says I’m awesome and I watch them roll their eyes as usual.

We finally get in and it was sensory overload. It is a very dangerous place for people who love Comics, Movies and T.V. shows. We look at some of the extremely rare Marvel and Adventure Time gear and I have to pull my children away from the merchandise section as this is a spot that we would never leave of our own free will. The force was strong with us that day and we made into the main section. We did laps around the event to check out everything before we stopped to look at all the details. I have my daughter on my shoulders and my other daughter in hand. During our tour we see Montreal Wolverine. He asked me to fight and I said sure. That is what superheroes do, especially when kids are watching.

Lady Deadpool meets the Male Deadpool and hugging commences. I ask them to take picture with my daughters. I remember thinking this is so awesome. We take pictures with Jack Frost from Rise of the Gaurdians, Link, a Ceaser Romero themed Joker from the Vintage Batman show, a Robot Dog, Bane from Batman, Spiderman, Captain America, Darth Vader, Storm Troopers, a Giant Sponge Bob and quite a few Manga Comic Characters I really didn’t know.

I look around and the scene just slows down I see so many Mothers and Fathers out bringing their kids to see these larger than life Superheroes. This is what life is about. Parents connecting with their kids and finding mutual interests that they can both get excited about. As always I am trying to make the most of my time with my Daughters and do something Amazing for their memories with Dad.

We met people who made handcrafted wooden wands for Birthdays, Authors, musicians, DJ’s, Comic book artists, people that made toys and sculptures, people in Armour who fight each other with swords on their free time and a lot of really crazy people.

We spend our whole day here taking multiple breaks outside as Dad smokes and little ladies get bored when staying in one place for too long. The Outside of CAPE was like a camp of costumed people. I wrestled my daughters and we used our best superhero moves against each other. I raise these girls to be strong willed and full of confidence. I teach my ladies to sing, dance, and never ever be afraid of being a nerd. You are not alone. There are millions of us.

The event wrapped up with a costume contest or showdown of ultimate awesomeness. I was sitting in the crowd with my Daughters with this huge smile on my face. It felt like Halloween again. Victoria is sitting on my lap to see the performances. The costumes were a mix of kids who really wanted to dress up and adult-kids who really wanted to dress up. The energy was amazing and I was telling my daughters to clap as hard as possible to encourage these people and their craziness.

We had Dr. Who, Ash and Pikachu, The Crow, Harley Quinn from Batman and Rouge and Storm of course. The winner looked like he was about 6 and he stood up in front of the crowd with a huge smile on his face as he accepted his award.

We walked home with this huge rush that I wished would never end. We had so much fun here I didn’t want it to stop.

These are the memories that mean the most in life. Every person in that place felt the magic and imagination of being a kid again. We appreciate these moments, these moments that we make larger than life. It’s like the kid in all of us is just waiting to come out, we just need an excuse and enough encouragement to find that magic again.

The secret is, we never have to lose this magic.

Never forget your sense of play.