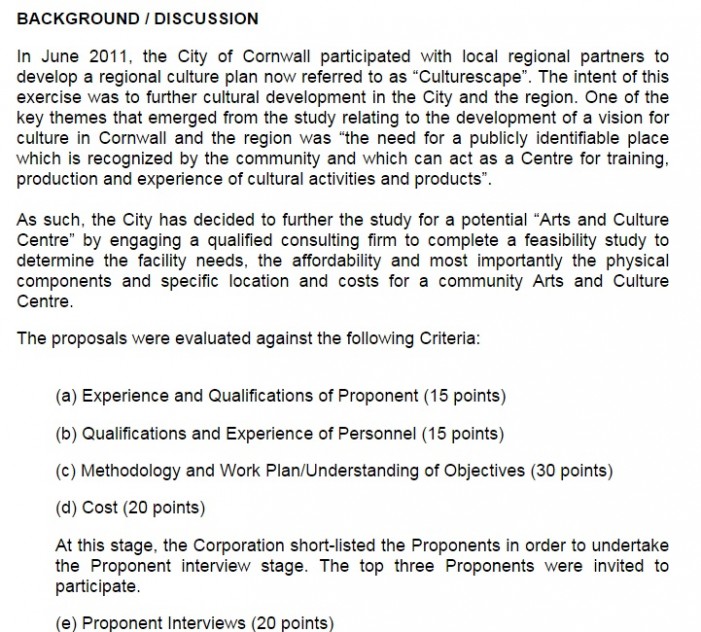 CORNWALL Ontario – Tonight council will most likely be giving out nearly $50K to an architectural firm for a feasibility study to create an arts centre in Cornwall or as many in our city are calling it, an utter waste of tax dollars.

The community has written cheques to out of town consultants before.  Remember Culturescape?  That wasn’t that long ago and cost between $80-$100K led by Denis Thibault and the EOTB.

That project has all but gone poof.  A waste of money essentially.

As someone that is wearing another hat and working in the Arts culture of our region, an Arts Centre is the last thing we should be spending on in 2015.

For decades there’s been talk about having an Arts Centre when in fact the Public Art Gallery has been a defacto one for over 30 years.   It has never been properly supported including this year seeing its budget cut to ZERO for a council that clearly doesn’t care about the arts and seems more interested in petty personal politics rather than what’s best for the community.

That the artists in the region lay down for this is indicative of the weakness overall of the artistic community.

The biggest issue is perspective.   Arts in this area cannot be looked at municipally.  It needs to be a regional partnership and funding between the counties, the city, and yes, Akwesasne.     While that’s a daunting task, the reality is that the artists themselves are the biggest problem in moving forward.

There are various groups and studios with many personalities.   Historically, even before I moved to this community 12 years ago there was infighting.   How many complained about former TAG director Sylvie Lizotte, but she kept her facility open for twenty years in spite of under funding and difficult partners to work with.

Frankly not a single penny of tax dollars should be spent on consultants until the Arts community puts its own house in order and warrants expenditures.

An Art Centre isn’t a building, but what’s in it, and who created it.     There have been many reports and ideas over the years.     And if there is going to be any money spent it should have the input and consideration of artists themselves. All of the proponents were Architectural firms.    What ability do these firms have in the true feasibility of an Arts Centre in Cornwall?  Building one yes, but whether it’s viable to have one?

Again, no representation from the arts or consideration.  With all due respect not a single person in this group should be making any decisions on this issue including the Culture Plan committee which also has been an utter failure.   Those making any decisions or recommendations should be working in the field or have clear experience in the arts.

To clarify, hockey people wanted the Benson Centre.   They lobbied, they organized, and then the city responded.

That hasn’t happened in the arts.

Speaking of utter failure, YAC, an attempt to create an Arts Council with its boards rotating, no executive director, no real results after three years, and over thousands spent in funding, and no real vision or leadership in the arts community.  Essentially at this point its become a mouthpiece for certain politicians.    It recently essentially gave up and reduced its membership fee to zero which invalidates the metrics of having a membership for institutional purposes.

Again, with the city’s only real independent art institution, its 33 year old public art gallery struggling after seeing its funding cut from the city, could any serious consultant recommend moving forward or investing in an art centre?

The gallery itself is under utilized while other art groups clamour for space and funding.  Does that make sense?

A responsible council will vote against this consultant and hold onto those dollars to invest in the arts themselves.

Arts are critical to a community in multiples of ways, but it requires support and investment to make them thrive.

What do you think dear CFN viewers?  Should Cornwall write this cheque?   You can post your comments below.

Disclosure:  I sit on the board of our art gallery, but am not speaking on behalf of the gallery or our board.

Council to Waste $47,940 + HST on Arts Centre Feasibility Study by Jamie Gilcig added by admin on September 14, 2015
View all posts by admin →

I’d like to see an arts centre here. But not before all the “arts” groups get their acts together and act as one. There is no need for each group to pursue their own agendas, which has not helped. Aultsville Theatre is okay, but it is not an arts centre. I’d like to see something like Brockville has with the BAC. We have the perfect building in the Port Theatre that could easily be converted to a similar facility like the BAC. There is an empty parking lot beside the Port Theatre and a few stores beside the Port could… Read more »

Hugger there is no political will for what you proposed. One of the Cultural committee members explained they need to do this waste of money so that they can qualify for Federal and Provincial funding for a big ol new building. Again, cart meet horse. Until artists can work together there is no need or hope for an arts centre. And certain politicians using crumbs to pit one group against another isn’t helping either.

I think one line in your response says it all….”Until artists can work together there is no need or hope for an arts centre.”

Hugger the Artists themselves will have to come to that conclusion. Sadly this is Cornwall and it’s the culture that will hold everyone apart. I can give you names and lists of who has sided with who and the factions. It’s so childish and backwards.

Since when has Cornwall come together as one. I can remember way back when that all I have seen was infighting and nothing will change. A town that has no arts centre is mighty backward.

What an amazing waste of money, once again. Arts is important for a community, to grow and prosper. This is so messed up. It really doesn’t have to be bickered over, and made into a difficult and confusing subject. We need to take this city back from these “thieves”. That’s pretty much what council is at this point. Just taking our money and using it as THEY see fit. Not how WE want it used. Waste. Personally, I’d like to see a proper dog park built. With a fence, gate, garbage cans, water fountain, trees and play structures. I can’t… Read more »

Jerry I am a woman of 64 years old and I left Cornwall back in 75/76 and when I went back because mom was dying in 1990 Cornwall has not changed one bit but instead went backwards. My mom’s neighbor who was from Cornwall lived many years in Toronto and then went back – sold her house and said that she had it with Cornwall. A great many people feel the way I do Jerry and they never went back. People hat my son went to school with (he is 37 years old and my daughter is 36 years old)… Read more »

The disappointment for me is that we voted in a mayor and a slate of councilors to represent the taxpayers of Cornwall and rather than accept the responsibility they all apparently are more willing to leave the process to outsiders. When a group of want to be politicians cannot with their own intellect and experience determine what is best for the community then we have as voters failed one another in a rather dramatic fashion. How these idiots can hold their heads up and say that they are doing right by us is beyond reason. This town has suffered enough… Read more »

Actually David you have to give council credit for last night. They reversed a horrible decision from management. Only Councilor’s Murphy and Macintosh supported moving forward with the Ottawa firm. It was a great victory for the people of Cornwall. Now the big question was would that have happened if not for this story which was our top traffic story for the day? Would the mayor of recused himself if we hadn’t written his daughter works for MA? See, you can make a difference in your community.

Admin you are absolutely correct in my opinion. Apathy is the root cause of the loss of freedoms and the cause of the demise of nations and civilizations. Holding leaderships feet to the fire and demanding accountability are the masses way of sending the message of disapproval. The message in this case seems to have been received and perhaps this forum played a larger role than most would like to give credit to.

Thank you for continuing to provide a voice not only for discord but also for unity.

Having read MacIntosh over the years my expectations of him are low and somewhat predicable, therefore no disappointment and no surprise. I hope that people like you and I will remind voters in the future should Murphy throw his hat into the mayoral ring.

It’s good the contract was not awarded to the pharmacy from Nepean. Now hopefully city staff can word the RFP so city pharmacies can get an advantage and ultimately get the contract for GSDL.

Not sure I’d use those consultants again. Reading the report it didn’t seem to grasp the available resources and historical role in Cornwall.

Well Cornwall does have a habit of using consultants that know the results council wants. And thus the consultants hired are the ones that will bring in the desired results.

It’s about time Cornwall got moving on this Arts Centre… we haven’t had a good dose of over-hype, backroom dealing, real estate scamming, finance shenanigans, incompetence, and dream chasing since the Cornwall Aces.