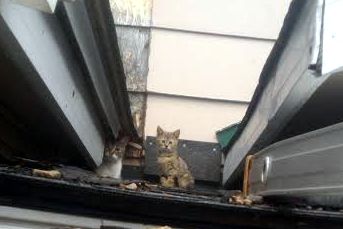 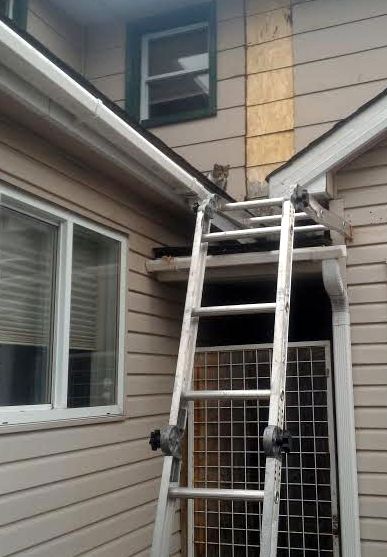 A feral cat gave birth to a litter of kittens a few weeks ago in Cornwall Ontario which resulted in a call to SD&G OSPCA on Friday  May 20th according to one witness.    An inspector from the local OSPCA attended at approximately 4pM but did not remove the mother cat and six kittens.

One witness said the inspector could not see the kittens, and another said they needed to go and get a ladder, but never returned. 9 days later one of the kittens has disappeared, and the others are in ill condition hiding in a crevice between two roof sections of the building.  With temperatures over 30c this weekend there are concerns for the cats safety.

One tenant of the neighboring building confirmed that her daughter used a ladder to try and retrieve them, and give them some food and water, but the cats were not cooperating, and all people CFN spoke with at the scene were bewildered why the OSPCA did not return?

It was suggested that if a person had abandoned cats in this manner they’d be charged by the OSPCA.

CFN is expecting an update Monday from the OSPCA headquarters in Toronto. This story was edited to repair a typo.

Brad Dewar of the OSPCA still has not responded to our media inquiry from yesterday.

Maria Caravaggio  sent in the following.

Hello, not entirely sure where to send this but I apparently won’t feel better until I do! The Mother cat and kittens that were found and not helped by OSPCA live just a block from me (which I didn’t know!) but the case of the disappearing kitten I DO know about!

We caught one sole kitten in our neighbour’s backyard, and we called OSPCA to bring her in, but they were closed, and that’s when our OTHER neighbour informed us that his adult son wanted a cat!

So missing kitten is safe and sound in a new home, probably doing much better than her siblings. Sorry if this isn’t the right area to send this message, I just wanted it sent! Hope you understand and thank you for reading this!