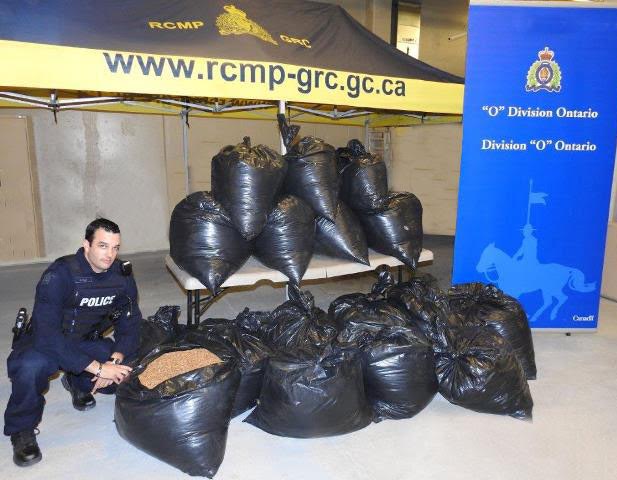 On Monday September 12, 2016, Cornwall Regional Task Force (CRTF) investigators attended the Canada Border Service Agency (CBSA) Cornwall Port of Entry (POE) to follow up on a domestic contraband seizure. As such, Kevin BUCKSHOT (43 years of age), of Akwesasne, Ontario was arrested for being in possession of approximately 180 kilograms of fine cut tobacco which was concealed in ten (10) vacuum sealed bags. BUCKSHOT was released on a Promise to Appear in Cornwall court on October 20th, 2016

Since our community relations “blitz” operation which was held in June, the CRTF continues to receive great cooperation from the general public. Another example of this occurred on September 13, 2016, when officers received information of suspicious activity taking place at a local shoreline South Glengarry campground. Investigators attended the area to investigate which led to a vehicle stop. Danny RHEAUME (20 years of age) from Salaberry-de-Valleyfield, Quebec, was arrested for being in possession of approximately 605 kilograms of fine cut contraband tobacco. RHEAUME also faces a breach of probation charge. He was later released on a Promise to Appear in Cornwall court on October 25th, 2016.

In addition to these seizures, on September 14th, 2016, the CRTF participated in an operation led by the Valleyfield RCMP and Sûreté du Québec which resulted in a seizure of approximately 1,450 kilograms of contraband fine cut tobacco and the arrest of one male from the province of Quebec.

These seizures of fine cut tobacco translate into roughly 2,235,000 cigarettes or 11,174 cartons of product that will not be reaching the illicit contraband market.

The individuals noted above, have been charged under the provisions of the Excise Act, 2001 and also potentially face charges under the provincial Tobacco Tax Act.