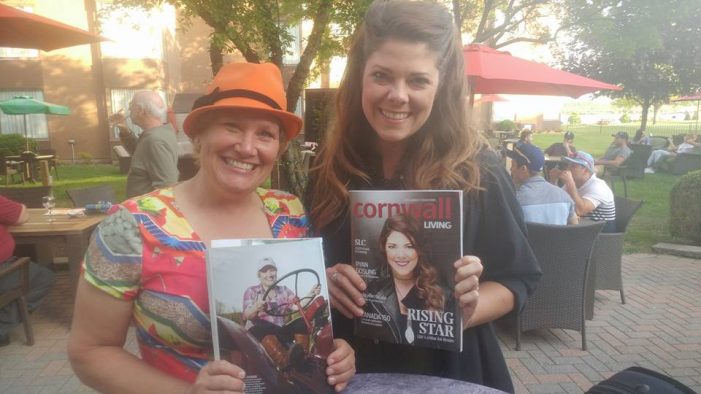 Cornwall Ontario – Brenda Norman is a petty political toe rag that has now bit the hand that’s fed her.   Not even from Cornwall, but from Quebec,  she embraced the worst elements of the clique to get her Garlic Fest up and running making it yet another poorly attended clique event that you didn’t really know about unless you listen to Corus radio, which fewer people seem to be doing every year.  Now she’s made some damning statements to Maclean’s magazine.  A Canadian National tradition for generations.

Following Councilor Bernadette “Bernie” Clement’s lead she moved her fest from Lamoureux Park to NAV Can.   Not sure why as it’s harder for those without cars to get to NAV, and of course our Park needs to be used and generate cash for the city.   Likewise, there’s a slim chance that attendees might spend some dosh in the downtown core (if the stores are open).  Frankly this writer is not sure why so many events have moved to NAV, but the one consistency is that they’ve been limp and poorly attended.

MACLEAN’S magazine just did a brutal story highlighting Cornwall’s racism, and how it impacted the Garlic Fest.

When word spread, festival vendors started cancelling out of spite toward the migrants and locals suggested they wouldn’t attend, as the supposed family affair became intertwined with the politics of illegal migration. While the organizers fought for the show to go on, the garlic festival brought out remarkable resolve from local people who insisted that racial tolerance would prevail in their hometown.

And there’s a ton of racism.  If you view what this writer calls “anti-social media” far too many have called the refugees “animals” suggesting Nazi like terms of disease and worse for those simply trying to make a better life for themselves.

(the article may have made an error referring to her as “Nelson” instead of Norman.)

“All of a sudden I’m getting calls of people who are going to cancel,” Nelson explains. She says about one-quarter of vendors voiced concern like, “this is never going to work. Nobody’s going to come if all those asylum seekers are here.”

Again, wouldn’t a built in extra audience of hundreds be a good thing? These folks after all had mostly been leading lives in the US and had the cash to get to Canada.   These are not people off a boat with nothing on them but sweat.

Many were bandying the latest iPhones etc.

“Why aren’t you coming?” Nelson asked vendors who cancelled from the garlic festival. “Did you have an accident? Or are you prejudiced?” She sent out a letter saying vendors who cancelled without a “valid reason” would be disqualified from all future garlic festivals. She then went further to personally invite the refugee claimants to the event. She roamed the hallways of the hotel and introduced herself in French, suggesting they come and share Haitian food or dance on stage.

Threatening vendors is never a route to success, but then many of the other actions of Ms Norman, including participating in the Maclean’s story in the manner she did, appearing to trash Cornwall, aren’t terribly smart either.

Most people want a better life and most will shave a corner if they think they can succeed.  Is that really a crime?  In the broadest sense that answer is yes, but reality and perspective can be impressive things.    In 2017 do we really want to live in  such a strange world where we label human beings animals just because of the colour of their skin or where they come from?  Shouldn’t everyone be judged based on their behavior and allowed to prove themselves to be the failure that Brenda Norman is?

Cornwall has major issues.  Economic, but mostly cultural. This is after all a community that shut down it’s 36 year public art gallery allegedly because they didn’t like a board member who is a minority.   This is an area where the school board is spending thousands of public dollars trying to cover up the fact that Principal Patricia “Trish” Brown allegedly ignored requests to remove swastikas from CCVS, a local high school.

And while many blame it on the “older” generation of racists and bullies, the simple facts are if young people are raised with racism and bullying they tend to either become them or are more sympathetic to them.

Cornwall needs to learn to build instead of tear down. It truly needs to be more inclusive than the show that we keep sharing to the World.

But mostly we need to stop letting people like Brenda Norman run amok with our events because Karma is indeed a magical thing, and this embarrassment to the community and her event are her just desserts.

What do you think dear CFN viewers?  Did you not go to the Garlic Fest this year?  Was it because of refugees or because you didn’t know the event was on?   You can post your comments below.