CORNWALL Ontario – Today the new City Council takes their Oath’s of office, but Sunday CFN caught up with Justin Towndale and Mark A MacDonald and chatted about themselves and things Cornwall. I met up with JT at the Civic Complex where an event apparently was occurring. It was quiet so we had some one […]

CORNWALL Ontario –  It’s been interesting since Hugo Rodrigues was brought into Cornwall to lead the Freeholder.  It really has.  He’s no dummy, but his Machiavellian gobbleyspin might fool some; but not those that have followed politics. Hugo still has yet to ask the Kilger council the money question regarding the Chem Tanks. Now he’s […]

CFN– Freeholder Hugo Rodrigues is spouting off about Water Meters for Cornwall in a recent editorial.   Frankly I’m not sure Mr. Rodrigues even lives in Cornwall.  The Poobah from the Canadian Association of Journalists was dropped in to helm the newspaper for Sun Media and after helping improve the paper is starting to come […]

CORNWALL Ontario – Yesterday my inbox was full.  My phone kept ringing and I nearly lost my voice. Hi Jamie I believe you made this happen. You have made a huge, positive influence against incredible odds.  You have helped to change the culture in Cornwall in a positive way. I will  savor this one blessing […]

CORNWALL Ontario – When Norm Levac was announced as CAO after the Paul Fitzpatrick scandal there was some hope from politico’s in the city as Mr. Levac was well liked and respected; but sadly Mr. Levac just took the extra college money for his kids for a few years and is now heading off to […]

It’s time.    I will be putting together my team this week.     I’m very lucky to have one of Canada’s greatest political advisers, Keith Beardsley, who has been giving me advice since high school on board. But if my candidacy has any chance it will take people; lots of people in Cornwall who […]

Greetings: The upcoming Labour Council debate is a prime example of doing the same thing and expecting a different result.  It’s an attempt by the CDLC to push their own agenda and it only results in dividing candidates.Chemical tanks on our waterfront, resignations, criminal charges, huge payoffs, and closed door meeting violations, are just a […]

CORNWALL Ontario – It’s been two days since Monday night’s council meeting in Cornwall where Stephen Fournier presented his report to council.   He really didn’t have to be there for the fifth time.   That’s unusual as Mr. Fournier is simply a closed meeting investigator. In this case it was for the illegal action […]

Did You Miss Out in Over 200,000 Visits of Exposure in July? CFN By the Numbers LIHOU Report! 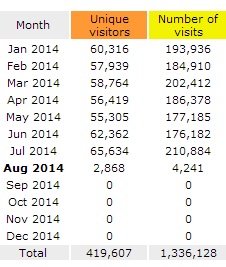 CORNWALL Ontario – It’s time for our July 2014 Lihou Report; named after Seaway News Editor Todd Lihou, who raved about their numbers without really giving any numbers.    His narrative inspired this new name change in our numbers reporting as CFN has always tried to be upfront about the support we get from you; our amazing viewers! […]

CORNWALL Ontario – Cornwall Ontario had two more citizens offer themselves for office.   Long time Councilor Glen Grant, (pictured above sitting with little leaguer’s who protested their ball park being turned into condos) who recently was condemned in the Fournier report for moving into an illegal in camera  meeting of the waterfront committee he […]