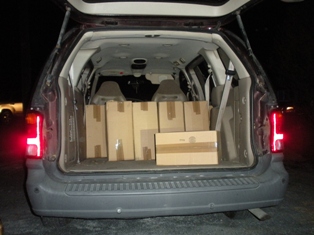 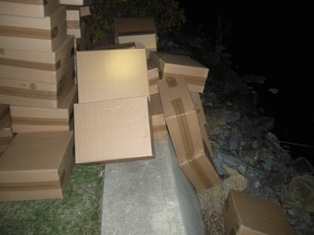 CFN – On March 26th, 2012, Cornwall Regional Task Force (CRTF) members received information that a boat was approaching shore in the East end of Cornwall.  As members arrived in the area two males were observed loading cases of cigarettes into the back of a van at a waterfront residence.  CRTF members moved in and arrested Daniel MALETTE (age 24) from Cornwall, Ontario, and Jesse COOK (age 23) from Lancaster, Ontario. MALETTE and COOK have both been charged under Section 32(1) Excise Act, 2001, Section 733.1(1) of the Criminal Code of Canada for failure to comply with their respective probation orders, and Section 177 of the Criminal Code of Canada for trespassing at night.  The conveyance, a 2000 Maroon, Ford Windstar, along with six thousand five hundred (6,500) cartons of contraband cigarettes were seized.

.
On March 7th, 2012, Jordan Henry DUSSAULT (age 24) from Ottawa, Ontario, was charged under Section 32 (1) Excise Act, 2001, after CRTF members observed a suspicious white van leaving the Bainsville, Ontario area.  The CRTF members stopped the vehicle near Riviere-Beaudette, Quebec, where DUSSAULT exited the vehicle then fled on foot.  After a brief search, DUSSAULT was arrested after officers located him in a nearby drainage ditch.  His conveyance, a white 2000 Pontiac Montana, along with fifteen hundred (1,500) cartons of cigarettes was seized. On March 12th, 2012, Lee Ann SHARROW (age 40) from Hogansburg, New York, was arrested at Cornwall’s Port of Entry (POE) by Canada Border Service Agency (CBSA) members on strength of an outstanding warrant for failing to appear for court dating back to a 2009 Excise Act charge.  SHARROW was held for a bail hearing.

.
On March 12th, 2012, after verifying the occupants of a vessel, with no navigational lights, approaching the Royal Canadian Air Force (RCAF) Association Hall, Water Street, Cornwall, Ontario, CRTF members arrested Robert LAZORE (age 36) from Snye, Quebec, with two counts of failing to comply with conditions of a recognizance, Section 145(3) Criminal Code.  LAZORE was also charged under Section 53 of the Highway Traffic Act for driving while his driver’s license was suspended.

On March 14th, 2012, Leah THOMPSON (age 27) from Akwesasne, Ontario, was arrested at Cornwall’s POE and was charged under section 4(1) of the Controlled Drugs and Substances Act , for being in possession of 13.4 grams of marihuana. She was released on her own Recognizance to appear in court at a later date.

On March 7th, 2012, Russell BENEDICT (age 37) from Cornwall, Ontario, was arrested by the Akwesasne Mohawk Police Service (AMPS) on strength of an arrest warrant.  BENEDICT was turned over to the CRTF where he was charged under Section 465(1)(c) of the Criminal Code of Canada  for Conspiracy to commit an indictable offence relating to a human smuggling case (aiding and abetting entry of illegal aliens into the US).

The CRTF continues to address the complaints of suspicious activity observed by local residents.  If anyone notices suspicious activity, they are urged to please contact the CRTF at 613-937-2800 or Crime Stoppers at 1-800-222-8477.