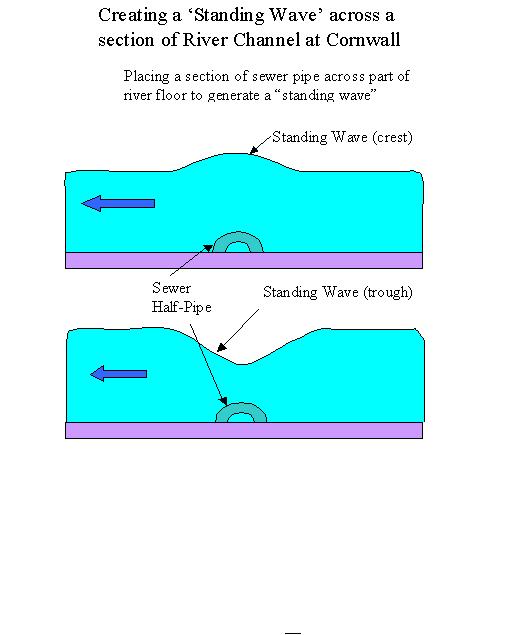 The proposal for a beach along Cornwall’s waterfront has generated some lively discussion. Many believe that a beach could attract more visitors to Lamoureux Park during summer. If the Environmental Department of the Mohawk Council of Akwesasne and Hydro One are willing, it may be possible to generate standing waves along Cornwall’s waterfront for the purpose of water surfing and perhaps water rafting in inflatable rubber dinghies.
The installation of a sewer half-pipe across part of the channel could create a wave to appear on the water surface, directly above the half-pipe. Fish may take refuge inside the half-pipe. A series of strategically-spaced half-pipes could generate a series of standing waves between the RCAF building and the Civic Complex. At some times, surfers could bring their boards to ride the waves. At other times, groups of people wearing life-preservers may be taken for a roller-coaster ride in a dinghy that riders over the waves.
The combination of a waterfront beach and waterfront surfing could attract visitors to Lamoureux Park during summer.
.

Letter to the Editor – Harry Valentine of Cornwall Ontario – Standing Wave for Cornwall Beach? added by admin on August 8, 2012
View all posts by admin →

24 Responses to "Letter to the Editor – Harry Valentine of Cornwall Ontario – Standing Wave for Cornwall Beach?"