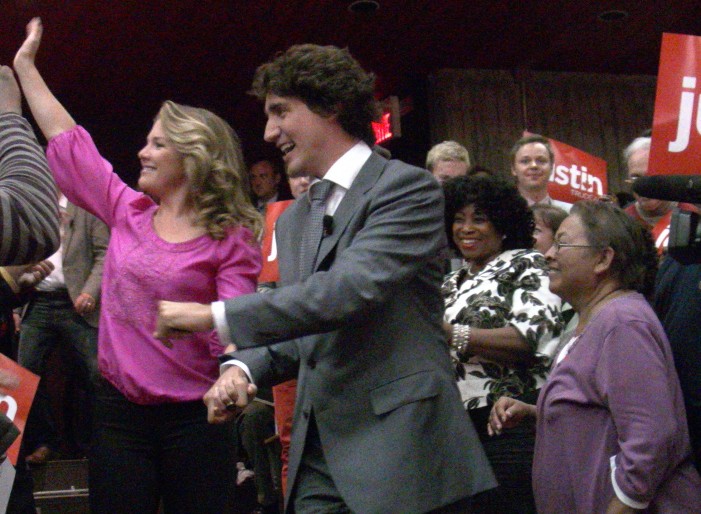 CFN– Last night, as I quietly sat huddled to my laptop by my desk watching Justin Trudeau make clear his intentions, I began to think, what a great opportunity this is for Canadians to once again have an open dialogue about the role of government as well as the direction they would like to see policy take in this country.

I had taken a similar perspective to the NDP leadership race, of which I was an early supporter of Thomas Mulcair’s vision of modernizing the party.

My political affiliations aside, leadership races, the debates and conventions associated with them are a great means of increasing political engagement and Canadians this time around will have the opportunity to take part in the discourse in a manner which they have never had before.

Not only will card-carrying Liberals be able to decide the future direction of their party, but that task will also be granted to Canadians as a whole through Liberal “supporter” category. A radical idea that no doubt will play a crucial role in the fate of the Liberal party that is desperately trying to rebuild and rebrand itself in an ever polarizing Canada, where Harper’s Conservatives are poised to become the national governing party the Liberals used to be in the twentieth century.

This will also be the second leadership convention to be held since the rise of social media. To use yesterday as an example, it was not even an hour, hell Justin Trudeau was not even finished speaking, and already facebook and twitter was aflutter and clearly ill-at-ease. My newsfeed on both websites was swamped with partisan attacks against a man who was had not concluded his speech and who’s every word was being analyzed before he has even released a platform or defined his views clearly to Canadians.

Something as simple as Trudeau’s saying

“I’m here to ask for your help, because this road will be one long, Canadian highway. We will have ups and downs. Breathtaking vistas and a few boring stretches. And with winter coming, icy patches”

a clear acknowledgment that a lot of work has to be done in the upcoming months, was being construed as means of questioning what part of Canada Trudeau thinks is boring.

A pretty empty and unwarranted attack on Trudeau’s choice of words, clearly being taken out of context. Again, we don’t even know what the Trudeau even stands for at this point.

Is it so much to ask that we give the all the candidates running for Liberal leadership some time to define themselves before we pounce on the attack, and when that time does come, to apply a certain level of objectivity to the argument?

Political parties and the party faithful should not tell Canadians what to think, but rather we in the political community should help guide them through the process of coming to their own conclusions. Parties should not demonize their enemies at every chance, but should seek to work with them and find common ground.

As a self-described moderate within the NDP  and a strong proponent of secularism, pragmatism, and empiricism I find

“the only ideology that must guide us is evidence. Hard, scientific facts and data”

as uttered by Trudeau last night to be a fundamentally optimistic and positive manner in which to formulate public policy as well as frame debate.

Militant partisanship, which carries a negative connation in Canada, is no better than zealous hyper-religiosity. Both are extremely dogmatic and based primarily on their belief systems instead of the application of objective logic and reason to the issue at hand. All militant partisanship will serve to do is further disengage and alienate Canadians during a time when political engagement in this country is significantly lower than where it ought to be. Point of Order by Stéphane Groulx – Allow candidates time to define themselves & Justin Trudeau’s Announcement added by admin on October 3, 2012
View all posts by admin →