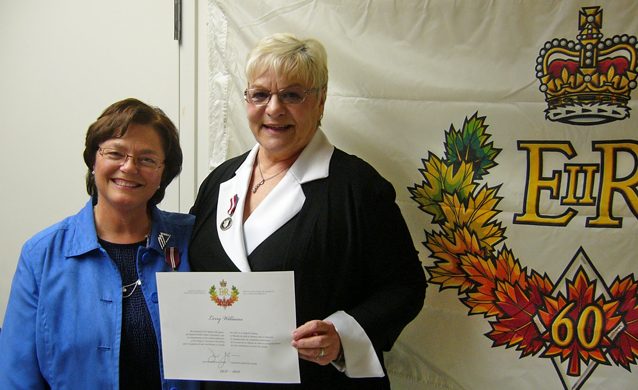 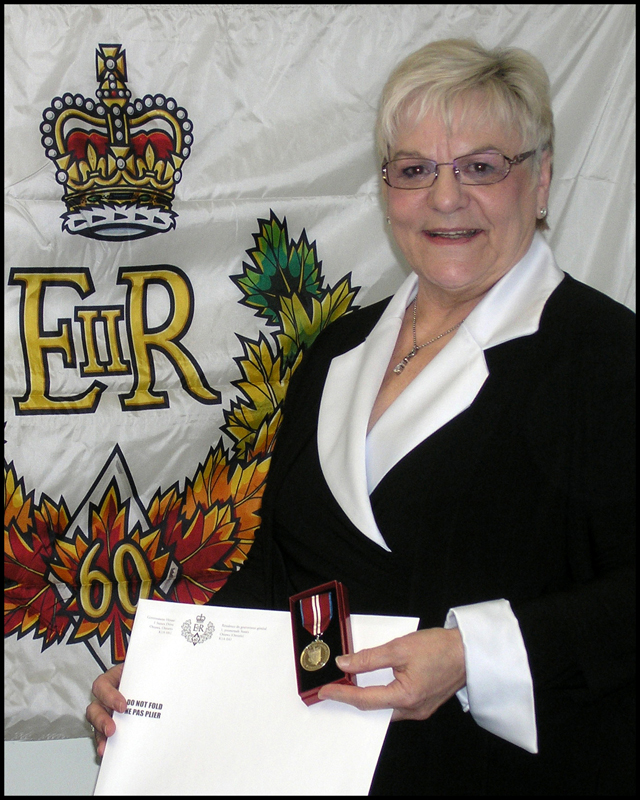 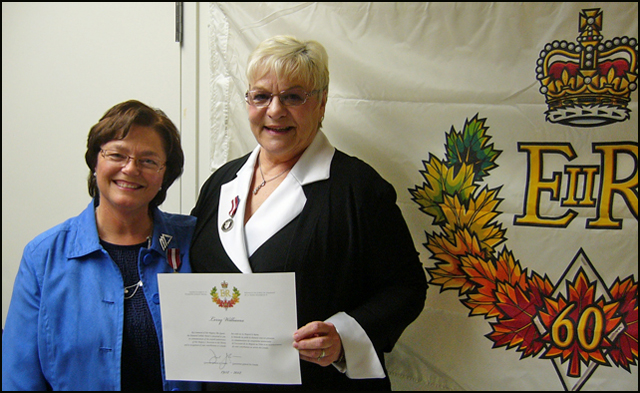 CFN – YWCA Sudbury was honoured to present Lorry Williams, a long time supporter of the organization, with the Queen Elizabeth II Diamond Jubilee Medal at the Meeting of the Board of Directors held on Tuesday, November 20, 2012. The YWCA in Sudbury wanted to host a reception at the art gallery for the presentation but Lorry asked them to keep it low key and to present it to her at the Board meeting. She was the only one to receive it in Sudbury from among the nominees submitted by YWCA Canada. The medal was presented to Lorry by Deborah Knuff, Past President. Last May Knuff herself received the Queen’s Diamond Jubilee Medal in recongnition of her volunteer efforts with the Red Cross Emergency Team, for her work with municipal and provincial elections and her work with native education.

“Lorry is one of my favourite people and a most deserving recipient of this medal. We met several years ago via conference call, but then had the fun of getting together once a year in person. Lorry is one of those great volunteers – always willing to take on a task, and always does what she says she will do, when she says she will do it!”  Cathy Riggall, YWCA Canada Board Member

The Medal was created to celebrate Her Majesty’s ascension to the Throne as Queen of Canada 60 years ago. This commemorative medal is a tangible and lasting way to pay tribute to 60,000 Canadians whose achievements have benefited their fellow citizens, their community, their organization and the country. It provides an opportunity to look back and recognize who made Canada what it is today, and to look forward and recognize who are actively involved in our country’s future.  For more information on the Diamond Jubilee Medal and the criteria, visit the special site.

“I am so grateful to Lorry for her guidance and support when I first accepted the role of President of YWCA Sudbury and as a Director on the YWCA Canada Board. Her many years of leadership with YWCA Sudbury has cemented the strong foundation upon which we conduct our business and influences us even now that she no longer sits on the Board. Whenever the Board members are struggling with a policy or procedure we just have to ask ourselves, “what would Lorry do?” and the answer comes to us. Her assistance with many fundraising projects over the past 20 years, including our Women of Distinction Awards Gala, has been a model for others to follow. I am delighted that her contributions have been acknowledged with the Diamond Jubilee Medal!” Deborah Knuff, Past President, YWCA Sudbury; Director, YWCA Canada

A daughter of Ernest and Julia Filion, Lorry was born and raised here in Cornwall, Ontario. Sisters Nancy Harris (Keith), Elaine Smith and brother Ernie Filion (Carolyn) still live in the area and are active and well-known in the community. She is predeceased by her brother Phil. Lorry is a wonderful partner to her husband Bill, the mother of two adult children, and she recently became a very proud grandma.

“I have had the pleasure of getting to know Lorry through the YWCA of Canada Nominations committee. Lorry has always stood out for me as a person who cares about others and puts that into action. She promotes creativity with her open approaches supporting a learning culture in setting recruitment and succession strategies. Lorry reminds us that we are a World and National YWCA movement, to be inclusive of diverse women and young women. In doing so she sets the stage for us to make the right recommendations to the board and membership. I feel blessed to have had the opportunity to learn from Lorry’s leadership as a colleague in this role over the last seven years. Congratulations Lorry on being the recipient of the Queen’s Diamond Jubilee Medal.”  Lise Blanchette YWCA of Canada National Board member, Co-Chair YWCA of Canada Nominations Committee

A graduate of the University of Ottawa, she and husband Bill moved to Sudbury in 1971 to continue their careers in education. Lorry retired in 1998 after 33 years as a teacher and principal at the secondary level for the Rainbow District School Board.

“We can’t think of a more deserving individual for this award. She inspires those around her to be better; better contributors, better community members, better people. Her gift for bringing out the best in you makes it impossible to not be drawn in. To be recognized with a Diamond Jubilee Medal for her commitment to improving the lives of others is a very rare and special honour. Her family is exceedingly proud of her.”   Trevor and Lori Williams

Lorry’s avid interest in womens’ issues led her to be involved in committees on Safe Schools, Harassment and Bullying, and in teaching and implementing programs dealing with self-defense for women, date-rape and family violence. This same interest led her to an affiliation with the YWCA about 20 years ago. She has since served in various capacities for the Board, on numerous committees, as Chair of Phase 2 Design Committee for the District Service Planning Committee, as Vice-President and President. Lorry was also a valued member of the nominating committee for YWCA Canada, where she helped to recruit and select dynamic and talented women, like Sudbury’s own Deborah Knuff, to become part of the National Board of Directors.

“We’ve always admired the way she’s so selflessly contributed to the community and the well being of those around her without agenda or hope for recognition. It’s great to see that her efforts and achievements have been acknowledged through this prestigious award – we’re so proud of her!” Tracy and Colin Marshall “Lorry is a strong supporter of the YWCA movement, and what I consider a quiet and humble leader.” says Marlene Gorman, Executive Director for YWCA Sudbury. She steps up where needed, and also steps aside to bring in and mentor other women who want to become involved in the YWCA, as evidenced when she facilitated the board reconfiguration to include 25% young women, and in passing on the torch for the silent auction – a successful component of the Women of Distinction Awards Gala, that Lorry built during her years of service.

Lorry continues to support the work of YWCA Sudbury, and this is why it is not surprising that YWCA nominated Lorry Williams for the Queen’s Diamond Jubilee Medal.

Stormont, Dundas and South Glengarry MP Guy Lauzon announced Tuesday the names of local residents who have been selected as recipients of the Queen Elizabeth II Diamond Jubilee Medal.  Among those named is Ernie Filion, brother of Lorry Williams.

“We were overwhelmed with the response to nominations and the number of worthy candidates for the medals,” said Lauzon. “We are so blessed to live in such a great community and country. These individuals have truly made a difference and are excellent examples of leaders and Canadians who make us proud.”

A formal ceremony to present the medals will take place Dec. 9 at St. Andrews Catholic Church in St. Andrew’s West. The event will begin at 1:30 p.m. and is open to the public to attend.

Don Smith reports on a variety of topics, notably good news items as well as social justice issues. (He is also a proud nephew of Lorry Williams and Ernie Filion.)