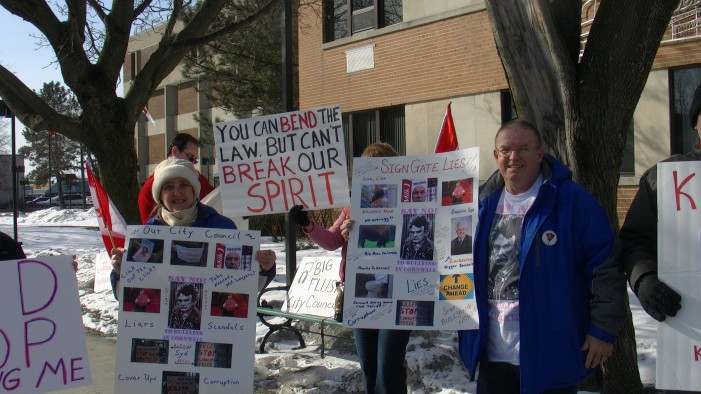 CFN – A small but spirited crowd braved the near -20 weather to protest in front of City Hall in Cornwall Ontario this morning. It was originally a protest about Councilor Syd Gardiner not being charged for trying to destroy their protest signs outside of the last city council meeting.

Those signs were only delivered to police 5 days after and the councilor was not charged with Mischief Under $5,000.

The protesters were also upset at the Kilger council whistle blowing cases and other acts of corruption.

There are also new allegations that Mayor Kilger after the last council meeting was seen joking with another alleged journalist and that  those same signs were in fact in the Mayor’s office.

I tried asking Mayor Kilger about that this morning as he was making a rare appearance in his office.

Jesse Tieman( yes, Randy’s kid!)  from The Cornwall Daily apparently had better luck speaking with the mayor and perhaps we’ll see what was said to him later.

What do you think Cornwall?   You can post your comments below.   Kudos to Cliff from Island Ink Jet who brought a pot of coffee out to the protesters!