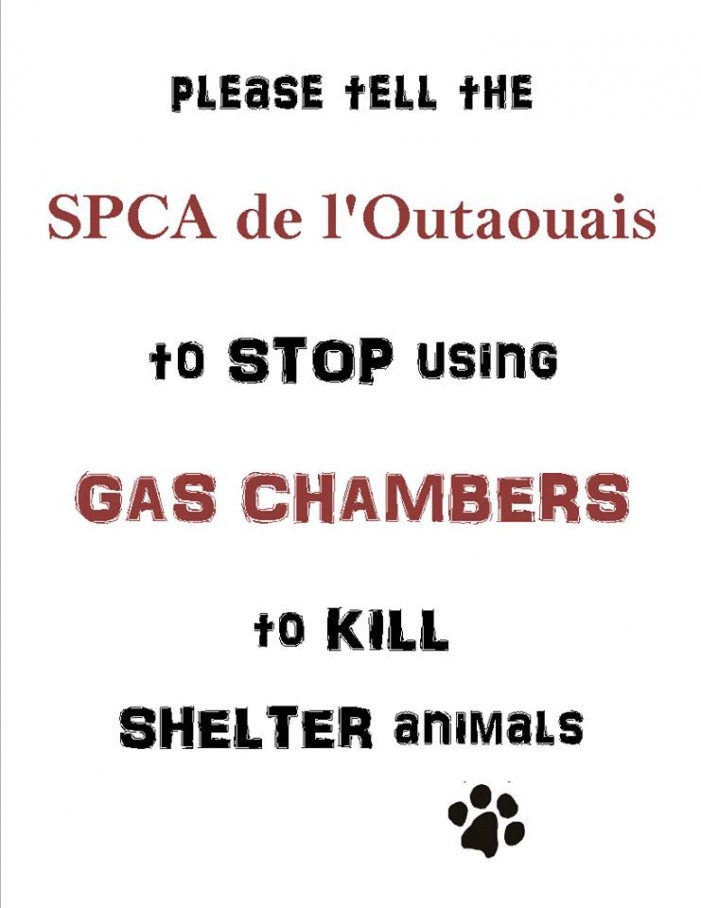 A group in the Outaouais is protesting the destruction of animals via Gas Chamber Saturday June 1 from 11AM-3PM.  Below is their press release and there’s a petition too!

LINK  The event has a Facebook page as well.

The TAKE ACTION AGAINST ANIMAL GAS CHAMBERS group invites media to attend a peaceful public demonstration in protest of current euthanization practices at the SPCA Outaouais, taking place on Saturday, June 1, beginning at 11:00 a.m. and ending at 3:00 p.m.  The location is at the SPCA at 132 Rue de Varennes, Gatineau, QC.

The protest has been organized in response to the recent decision made by the Ministry of Agriculture, Fisheries, and Food (MAPAQ), that will allow the SPCA Outaouais to continue to use the gas chamber to euthanize homeless, stray, and surrendered family pets in this manner for another five years.

This method of euthanasia, which allows animals to agonize for up to 27 minutes, causes needless and excruciating suffering. Multiple animals, specifically cats, are placed in the chamber at one time.  Despite being separated in carriers, they must watch the other cats in the gas chamber with them die as they await the same fate. The level of agitation in the chamber can be high, and extreme fear and panic is common among the dying animals.

In addition, operators are trained via a manual, allowing for various errors to occur.  SPCA noted on one occasion, a cat was placed in the gas chamber and the operator forgot to turn the gas on. Thus the cat sat in the cramped gas chamber for approximately 30 minutes until after the employee returned.  Finding the cat alive, the operator then turned the gas on.  It can be assumed this cat was likely uncomfortable confined in this unfamiliar and uncertain environment before their death.   The carbon monoxide used in the chamber is also a safety hazard to the shelter workers who may inadvertently inhale this toxic substance due to lack of proper training or possible exposure to the gas.

The SPCA Outaouais claims to take in an average of 8,500 animals per year, and adopt out approximately 2,200. This leaves a staggering number of animals left behind to die in this barbaric way. Take Action Against Animal Gas Chambers Has Protest at SPCA Outaouais Saturday June 1, 2013 added by admin on May 30, 2013
View all posts by admin →