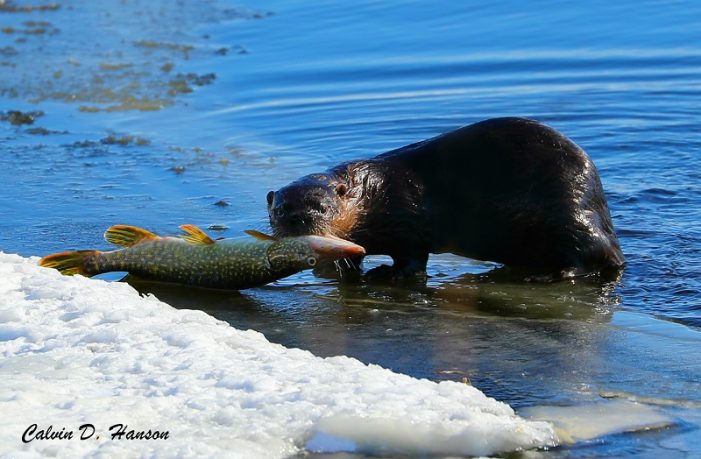 It’s amazing, some of the candid shots that Calvin Hanson captures through the lens of his camera!

When I first saw the animal it was swimming in the open water, and it did not have a fish.

It disappeared in the water and made an appearance about 4 minutes later, this time with a huge fish in its mouth.  It swam through the open water toward the edge of the ice, and it plunked the fish onto the ice and then it climbed onto the ice itself.

The fish was very much alive flipping and flopping.  The animal kept looking around, very proud of its catch, and rightly it should be.  The animal seemed to want to keep the fish alive as long as possible.  It took several minutes holding the fish by the head, by the body, and by the tail.  Although it held the fish’s head in its mouth several times, it did not bite down to kill the fish.

The animal started eating the fish tail first.  I suppose maybe to keep the fish alive.  The animal was soaked from swimming in the river and being a very cold day it didn’t take long for its coat and whiskers to turn to ice, and at that point it would take the fish and throw it back in the water, grabbing it and submerge both the fish and itself in the river for several minutes, then it resurfaced with the fish in its mouth, plunking the fish on the ice again and climbing on the ice to eat some more of it.  This ritual occurred 6 times.

Wouldn’t it be great to see a book of some of Mr. Hanson’s work? Post your comment here and ask him to put one together!

Photographer Calvin Hanson Captures an Otter in South Stormont Dining on Pike 022719 added by admin on February 27, 2019
View all posts by admin →