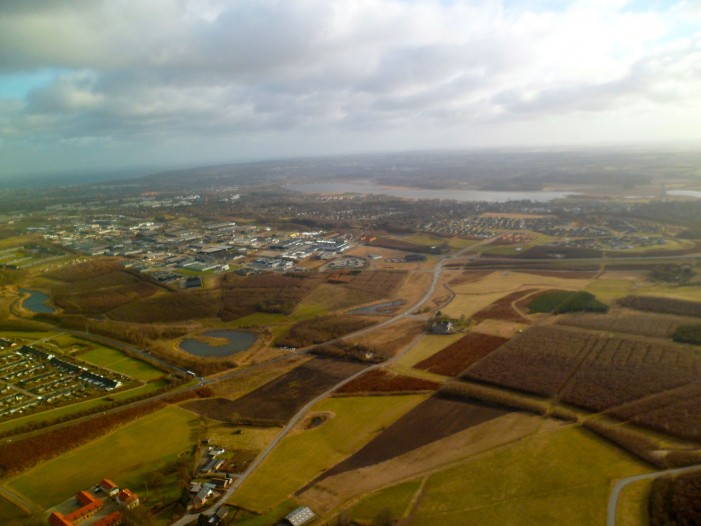 CFN – Being on exchange has provided me with a number of opportunities that I probably wouldn’t have had the chance to do back in Canada. My latest opportunity was a helicopter ride around my city. Or, to be more specific, around a couple sub divisions. This has been only the second time in my life that I have been so high up in the air (the first one, of course being my plane ride here) and it was such an amazing experience!

The day had been pretty windy, so being up so high proved to be a little bit rickety and rocky, but with the view being so breathtaking, I found that I didn’t mind the rocking of the aircraft (my body made sure to remind me so afterwards though, as I felt dizzy and nauseous for a couple hours thereafter).   It, like so many other things lately, passed by in a ridiculous blur. I was only up in the air for about ten minutes, but that was the quickest ten minutes of my life it seemed.   Inside the helicopter, it was a very small space, but was very much like the inside of a car (or, at least, the back side anyways. The front looked nothing like a car). Before we got in (there was another lady who was going up as well) we were told a quick briefing of what we were supposed to do, which can easily be summed up in a couple sentences: keep breathing, put your seatbelt on, don’t step on the black things that the helicopter uses to land on, and don’t open the doors. Easy enough.

The step into the helicopter was a bit steeper than I had originally thought, so I’m glad that I was wearing appropriate clothing that enabled me to do so!

As soon as we were nestled in and put on our headsets, the pilots both greeted us through the headset connection (one of them was from Germany, so generally everything was said in english. I felt oddly reassured that there were two pilots, although logically, if something had gone wrong, having two pilots wouldn’t have actually made a difference, so why it reassured me, I’m not certain.

Take off was nice and easy, and off we went up into the sky. That was when the wind became even stronger but the pilots reassured us that it was fine. They also told me that they were not allowed to do loop-de-loops. Whether it be just that certain time or ever, I’m not sure, but it would have been pretty fun if they had!

It seems as though those next ten minutes just flew by, because the next thing that I was aware of (after the captivating sceneries) was that we were nearing the place that we had started at, and slowly descending.   After waiting for the guy to run over and to open the door, I exited and went back into the building across the street to await the arrival of my host mom. It was definitely an exciting experience! The only thing I would have done differently, I think, would have been making the time longer to absorb it better, that’s for sure!   And, I even remembered to follow all the rules given! I remembered to keep breathing, not step on the black bars, I wore my seatbelt and I didn’t open the doors! All in all, it was an amazing opportunity, one of many that I have gotten to experience and will continue to experience!

Tabatha Pilon is a 17 year old student from Cornwall Ontario spending a year in Denmark.   She will be writing to us  each week or as her “gymnasium” schedule allows.

.
If you have questions for her or would like to sponsor her column email us at info@cornwallfreenews.com

Notes from Abroad – Tabatha Pilon Riding a Helicopter in Denmark! March 2, 2012 added by admin on March 2, 2012
View all posts by admin →