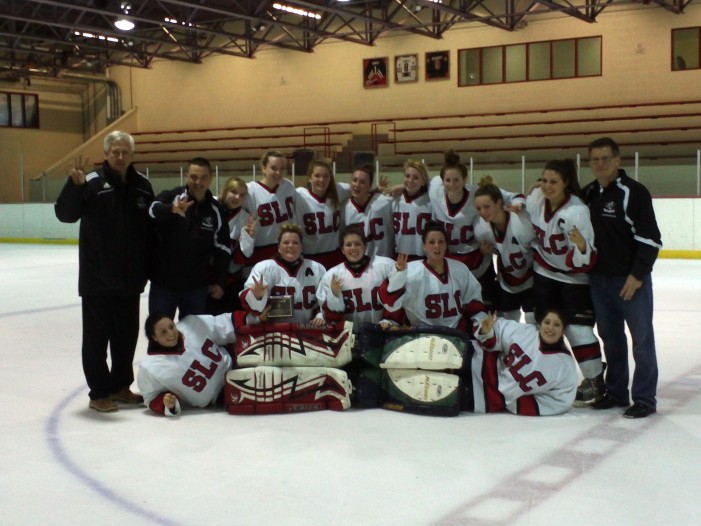 The team won gold at the Seneca Invitational tournament on Friday, March 16 in Toronto. They wrapped up the tournament with an exciting 2-0 victory over Fanshawe College.

Winning is something this team has been getting used to.  They haven’t lost a game in regulation since a 1-0 setback to Durham at their first tournament back in November.  The Seneca tournament victory was the Sharks third in a row, following victories at the Brantford Laurier tournament on Jan. 20 and at Conestoga College tournament on Feb. 10.

The Sharks opened up round robin play at Seneca with a 4-0 win over Sheridan College. Cornwall’s goal scorers were Emily Kinstler, Callie McLeod, Sara Hutchingame and Mackenzie Thomson.

They defeated Fleming College in their second game by a score of 3-0.  Julie Curtis, Taylor Johnstonand McLeod lit the lamp in this contest.

After round robin-play, the Sharks were at the top of their pool. That set up a semifinal game against University of Toronto.  They proved to be little opposition as the Sharks crushed them 7-0.  Jenay Morin lead the attack with three goals.  Kinstler chipped in with a pair, while McLeod and Katereena Emmell had singles.  Cornwall goaltender, Amber Lapierr, not only posted a shutout, but recorded an assist in the contest.

Fanshawe College, of London, won the other semifinal game which set the table for an exciting gold-medal final.

The first period ended up scoreless.  Although Fanshawe controlled play early in the game, the Sharks picked it up as the period progressed.  Callie McLeod with her fourth goal in as many games, opened the scoring for Cornwall late in the second period.  Cassie Warren solidified the victory with an empty-net goal late in the third.  Amber Lapierre recorded her fourth shutout of the day.

Sean Boulerice, who coaches the Sharks with Mike Pettinella, couldn’t say enough about this team.

“These girls never cease to amaze us.  They have done everything we have asked of them throughout the season.  There is not one person in that locker room that puts themselves above the team.  They have been a joy to be around this year and have gelled into a very cohesive group.

“As incredible as our results were this year, they had fun doing it. It’s teams like this that make your decision to coach next year very easy”.

Mike Pettinella added: “These girls were so focussed all year. They worked hard and earned every last ounce of the success we have had.

“Our record is even more impressive considering the quality of competition we have seen in this level of hockey in recent years. We will miss the experience of our graduating players but look forward to big accomplishments again next season with a strong core of returning Sharks who have learned what it takes win.”

Over all on the season, the St. Lawrence College Women’s Sharks had a 13-1-2 record.  More impressive was the fact that they recorded 13 shutouts.  In 16 games they outscored their opponents 41-3.

It was not as easy as it may seem.  They won five games by one goal and were involved in two shootouts.

The Sharks will celebrate their successful campaign at the SLC Cornall annual athletics banquet on Wedensday, April 5, at the Ramada Inn.