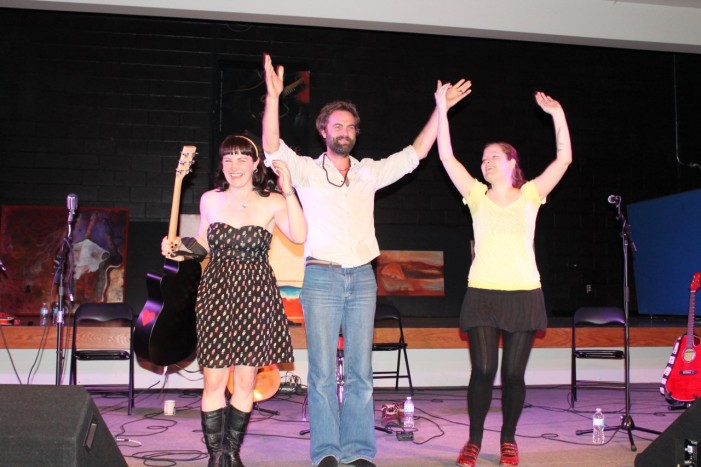 CFN – I have to say that this year at the St. Lawrence Acoustic Stage has been phenomenal. So many very talented performers have graced the stage and shared not only their talent but a glimpse of their personal lives as related to their songs. The board and volunteers need to give themselves a great big pat on the back. As for myself, I feel privileged to not only support the stage but report on the performances.

As the season ender, the management at the St. Lawrence Acoustic Stage decided to change things a little. The show featured 3 very talented musicians but the twist was that they were all on stage together and they took turns playing their own music and occasionally backing up each other. You would never have known that they had met for the first time just before the show.

Originally from Scotland, Fraser Anderson came all the way from France to play at the stage. Some of his credits include “performing with Dougie MacLean as a vocalist and supporting Joan Armatrading, The Low Anthem and Chuck Berry in concerts around Britain and France.” His style has been described as “simple folk-soul with a retro vibe.”

(In case you don’t remember when you see quotes it means that I have ripped off the text from the St. Lawrence Stage program.)

Ambre McLean came all the way from Guelph to be in this concert. She is a regular on the Canadian music festival circuit and has gained a lot of recognition for her writing skills. Her style has been described as “straight shooting and honest lyricism with a gritty blues undertone”.

Tara Holloway is a borne Ottawa native but has travelled extensively. Her tours have taken her across Canada and the United States. A tremendous talent but her style is difficult to button hole. “Some have described Tara as a folk/blues/punk/rock singer/songwriter in a futile attempt to describe somthng that really defies description.” I found her performance pure entertainment, even her gaffs seem to fit into her act.

For those of you who have missed the shows this year, well, the new season starts on September 15 with Catherine MacLellan and Jadea Kelly. To find out more details about the programs you should go to their web site:

……And next year I promise to have a better video recorder.