Apparent underground fire is cause for alarm in Cornwall Ontario by Don Smith – August 29, 2012 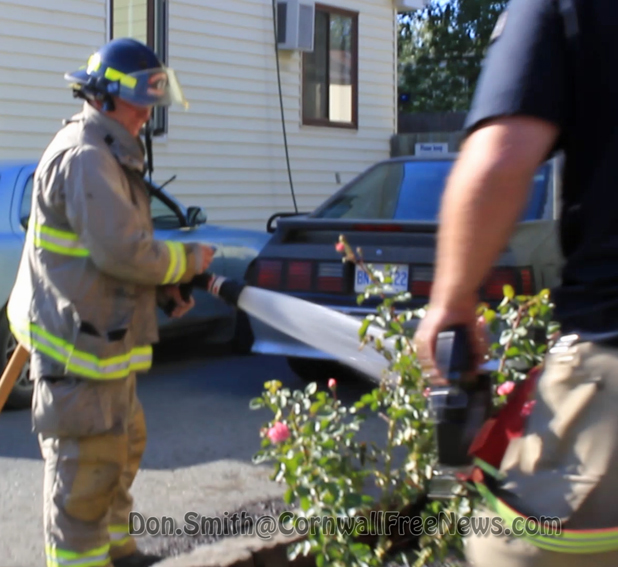 CFN – At about the supper hour today, a single fire truck was dispatched to the 300 block of Seventh Street West.  Home owners Vince and Rhonda Joubert were at work at the time, but returned home to investigate.  A neighbour to the east had been noticing a burning leaves smell since Monday and was advised today that the Joubert’s well-kept front yard flower garden was smouldering.  He investigated the matter himself and observed that the ground was very hot to the touch and smoke was rising, so the Cornwall Fire Department was summoned.

A small crowd looked on as a firefighter uprooted a damaged plant and hosed down the area around the front porch.  The neighbour who first smelled the smouldering figured that it was from a naturally-caused “bog fire”, but Vince Joubert isn’t convinced.  Although most of this older neighbourhood in the city’s original mile square is serviced by utility wires strung on poles, apparently a few years ago an underground phone cable was strung between the boulevard and Joubert’s electrical service entrance, right in line with the area which was burning.  He also recalls when the sewer and water lines were replaced in recent years and the road re-built how a Bell cable in front of the neighbour’s home was severed, requiring a technician to spend a week re-establishing all of the connections.  The Fire Department immediately launched an investigation to determine exactly what utility work was recently performed in the neighbourhood and by whom.

That was a question which most of the neighbours could readily answer.  The area of Cumberland and Seventh Streets is undergoing infrastructure upgrades in the way of a fiber optic expansion of the region’s Internet connection to the backbone of the World Wide Web.  A team of contractors, many using unmarked white trucks, has been employing a technique known as non-destructive boring/digging to minimize damage to the neighbourhood lawns and driveways as the cabling is strung from boulevard to boulevard underground.  While he has to wait for an official judgement, Joubert thinks it probable that when the new fiber optic line was bored through his boulevard, the existing Bell cable might have been nicked and the resultant shorted wiring overheated, and fire followed the line into his home.

Observing a number of butts along the sidewalk, the Fire Department wasn’t quick to rule out the possibility that the fire might have been started by a cigarette.

The Fire Department is no longer on the scene.  A Cogeco technician made a brief visit to the home to discuss the situation with the Jouberts.  The investigation is ongoing.  The two have lived in the neighbourhood their entire lives and at this house for about 25 years.  As for how well the family may or may not sleep tonight with the cause not completely certain, they’re not leaving matters to chance – a trusty sprinkler is keeping the lawn and garden well watered.

Our video footage shows firefighters on the scene as well as the recent fiber optic work.

One Response to "Apparent underground fire is cause for alarm in Cornwall Ontario by Don Smith – August 29, 2012"