The Politics of Opposition & Is Kathleen Wynne the Next Ontario Provincial Liberal Leader? by Craig Carter Edwards – November 6, 2012 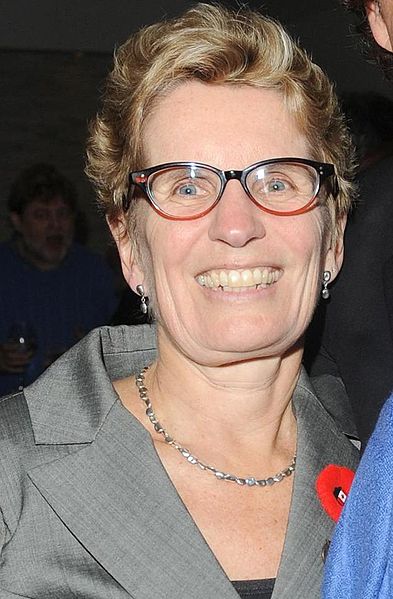 “We can be in total disagreement with someone without denigrating them as a consequence.”

CFN – Liberal Leadership season is settling in across Canada with races underway federally, in Québec and in Ontario.  Political people are lining up behind their preferred candidates and trying to convince others to join them.  Standard wisdom tells us that part and parcel of the running for game is running against.  As candidates actually declare, supporters are starting to ask themselves – if I stand for candidate A, why do I stand against Candidate B?  As with all political races, when the lines are drawn and the water hole of undeclared voters begins to shrink the contest inevitably turns into a competition not just of policy, but of personality.  But does it have to be this way?

Yes, it does – because when we vote, we’re not just selecting ideas we prefer, but trusting a leader to implement them.  Rob Ford’s win in Toronto was due at least as much to his perceived commitment to keeping his word as it was to his actual policies.  More than that, we pick leaders based on our perception of their ability to play politics successfully.  Part of Michael Ignatieff’s perceived appeal was that he would be the second coming of Pierre Trudeau.  A well-spoken intellectual with a bit of international seasoning would surely have the moxie needed to woo the masses and take on a rather bland Stephen Harper.  That didn’t work out so well because Ignatieff fell victim to the truest of political truisms – define or be defined.

Now, Justin Trudeau has ascended into the public spotlight in a fashion most candidates can only dream of, partly because he is the literal next-gen Trudeau, but also because he looks and sounds the part of a successful politician.  In the absence of specific policy, pundits have focused on how fresh and energized Trudeau will look squaring off against the two angry old men that are Stephen Harper and Thomas Mulcair.  Justin Trudeau’s hair has gotten more press coverage than Mulcair’s stance on just about anything.  According to some polls (always to be taken with a grain of salt), Trudeau’s image alone could be enough to return the Liberal Party to government.  Potential leadership opponents have been gun-shy to enter the race, faced with the prospect of out-charming a political superstar.

This reality presents a bit of a conundrum for the Conservative Party, too; the personalized line of attack that worked so well against Ignatieff and his predecessor, Stéphane Dion, will bounce off Trudeau’s flowing locks harmlessly.  Canadians already feel they know Justin and like what they see.  The Tories face the much more daunting challenge of attacking Trudeau’s eventual policies as harmful to our nation’s security and economy.  That will be a tough card to play, as it can cut both ways.  Count on Stephen Harper to buffer attacks with an attempt to soften his own image; we might soon be seeing more of the infamous sweater vest.  Given that his entire political narrative has been built on an arc of opportunistic cynicism, it’s doubtful any such attempt will be taken seriously by anyone other than Harper’s most die-hard supporters.

It would be silly to deny the importance of personal brand in shaping political success – but what of personal attacks on competitors?  Is it possible to do politics without denigrating one’s opponents?  The evidence isn’t promising.  Political attack ads are nothing new – they’ve been around, in fact, as long as politics itself.  As the best policy choices tend to hover around the middle, personal attacks present clear opportunities for candidates to establish why their political brand is a safer, stronger one than that of their opponents.  Survival of the fittest, after all, isn’t about being the strongest but being the last candidate standing.

There’s an unfortunate sidebar to this, though – when would-be leaders or Parties focus so intently on shoring up their own political brand and relentlessly attacking their competitors, politics becomes more about attack and defend rather than working together to create the best policy. This is when mistakes happen, as they did with the Walkerton tragedy in Ontario or as they’re happening right now with Harper’s mismanaged trade deal with China.  These sorts of mistakes foster disillusionment in the voting public, leading to lower turnouts at the polls and a weakening of our democratic system.  Is this an inevitable political paradox?  Is the politics of opposition necessary to win, but unavoidably damaging over the long run?

Not, I would argue, if one’s political brand is designed to be supportive (dare I say, leader-like) from the get-go.  One of my favourite campaign moments came in the 2003 Ontario general election when then-Official Opposition Leader Dalton McGuinty came to the defense of Premier Ernie Eves.  Eves had been rattling off the nonsensical insults that frequently crop up in the waning days of campaigns, calling McGuinty a pointy-headed reptilian kitten eater.  When asked about this by the press, McGuinty’s reply was political gold; “I know Ernie, and this kind of thing isn’t him.”  With one sympathetic phrase, McGuinty showed the class and empathy most of us want from our leaders and undercut his opponent without resorting to personal attacks himself.  McGuinty walked away from that election Premier of a majority government. One of my favourite Ministers in the McGuinty government is Kathleen Wynne, one of the two declared candidates hoping to become the next Leader of the Ontario Liberal Party.  The reason that I and many Ontarians of all or even no political stripes like Wynne so much is because she is sincere, dedicated and positive.

In addition to this, she is consistent in both her thoughtfulness and in her personal integrity.  When she expressed discomfort with the recent prorogation to the Queen’s Park Press Gallery, there were few who assumed Wynne was strategically distancing herself from her Party for personal gain.

Why?  Because the Wynne we heard that day was the exact same woman that expressed dismay when her Party backed down on increased sex education in Ontario’s public schools.

Wynne remained consistent to her brand when she sent out a tweet Monday morning, congratulating her leadership opponent Glen Murray on a media interview:

Now, I’m sure the people who actually get paid to do political punditry would disagree with me, but I’d argue that little line scored Kathleen Wynne the first point in Ontario’s leadership race.  She has demonstrated that the person who’s running for leader is the same one who was much respected as a Cabinet Minister, reaffirming her integrity and credibility.  She has complimented one of her opponents, setting the campaign respectability bar high and making it harder for anyone to use personal attacks down the line.  At the same time, she has set a positive tone for the race that will help avoid the fractious politics that often come with leadership races and could weaken the Liberal Party leading in to a likely spring election.  Not bad for a kick-off, I’d say.

Politics is perceived as a blood sport because it’s always been that way; this doesn’t mean it can’t change.  Just as there were days where it was unthinkable that a woman would have a vote, much less lead a Party or a province, there’s no particularly valid reason why we can’t put the politics of denigration behind us and move on with more respectful competition; such mindful contests could even be of strategic benefit, as I think Kathleen Wynne is teaching us.

Yes, politics is about fighting to the finish, but leadership is about setting the example.  It’s time for Liberals to show everyone just how progressive they’re willing to be.

The Politics of Opposition & Is Kathleen Wynne the Next Ontario Provincial Liberal Leader? by Craig Carter Edwards – November 6, 2012 added by admin on November 5, 2012
View all posts by admin →

24 Responses to "The Politics of Opposition & Is Kathleen Wynne the Next Ontario Provincial Liberal Leader? by Craig Carter Edwards – November 6, 2012"