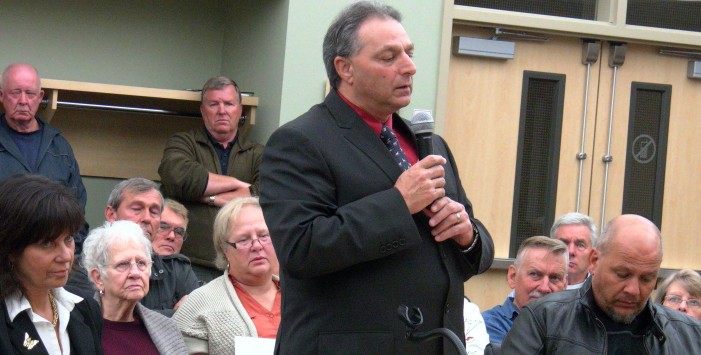 When the highest court of the land refuses to hear the case of Howard Galganov and Jean-Serge Brisson who wish to advertise signs in the language of their choice, then you can hedge your bets that democracy is dead in our beloved Canada.

If courts in Canada at all levels refuse to grant to private businessmen the opportunity of expressing themselves as is supposedly guaranteed under Canada’s Charter of Right’s and Freedoms under Section 2b, then there is a problem, a very BIG problem.  But I digress, it will be an even bigger problem if us, as taxpayers and concerned Canadian citizens, do nothing at all about these types of subjects.

What is even more bold and more concerning, is that currently in Russel Township there are agencies who are flatly ignoring the By-Law that seeks to have businesses advertise in both English and French.  As CFN has already reported on this, I feel it would be a waste of time and print as to repeat the agencies in question and their reasoning behind the concept to ignore a By-Law that ALL businesses should abide by to begin with.

What have we got here?  Well, we have a two tier system that allows certain organizations to post signs in the language of their choice and apparently all others left to follow the laws of the land.

This situation folks is not a democratic ideal.  Two tier systems are the brainchilds and the results of totalitarian states that supposedly were left to the dustbin of history to quote Trotsky.  This sort of nonsense was supposed to have been left behind during the last century.  But like some grandiose, dark Pheonix, this concept of the caste system has been reborn in, of all places,  ‘Our’ freedom loving Canada.

Galganov is correct in his assertion when he states that this isn’t about a language issue but that the issue of language is but a symptom of something larger.  I would add that this something larger is but the concept that governments can dictate at their discretion what is best for its’ citizens.  But do we not elect our governments?  Or have they become our vanguard; willy-nilly deciding what is in our best interests?  This most recent decision by the Canadian Supreme Court not to hear Galganov and Brisson’s case tells us that indeed the above has become the new norm.

No worry folks; you need not think for yourselves as Big Government will do all the thinking for you.

My newest Letter to the Editor is not set out to insult nor insinuate anything to anyone nor any group but should be viewed as a wake up call to those who love the concept of democracy.  I am writing this today to help people understand what is occuring and the seemingly powerless affects of our courts to do anything about a subject so innocent as the freedom for business owners to advertise in the language(s) of their choice.

If our courts cannot do the right thing in such a simplistic issue then how are they to decide on other issues such as euthanasia?

Not only has my faith in all levels of the Canadian court system been impacted by all of this but also what defines our very concept of what we believe democracy to be.

When one group of people have access to the best jobs, political offices and are permitted to break laws (such as what is occuring in Russel today) then we simply no longer have a society that lives by the democratic ideal.

And what is even worse then the idea above, is that today we have language laws in both Ontario and Quebec that permit linguistic discrimination; both the artificial restricting of one and the propping up of another certain language to the negative effects of all others concerned.

Democracy is dead in Canada.

Cory Cameron Says that Democracy in Canada is Dead After the Galganov/Brisson Supreme Court of Canada Decision LTE added by admin on December 9, 2012
View all posts by admin →