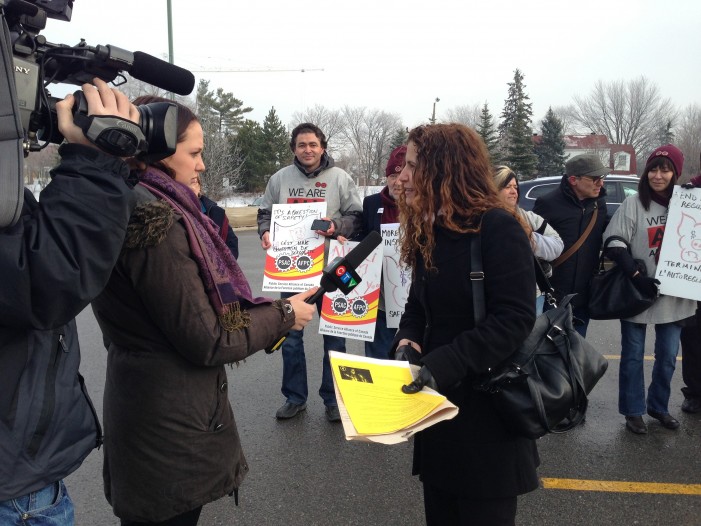 CFN – Members of the Public Service Alliance of Canada (PSAC)  visited the Real Canadian Superstore (RCS) at 190 Richmond Rd., operated by Loblaw Companies Ltd., to demand that the store commit to higher standards of food safety.

This action and demand fall on the heels of an undercover video released by Mercy for Animals Canada on December 8, which shows flagrant abuse and questionable sanitary practices of pigs intended for human consumption at a slaughterhouse operated by Puratone in Manitoba. Puratone supplies pig products to many grocery chains in Canada, including Loblaws and Sobeys.

WARNING: Video may not be suitable for Children or the Sensitive.

A CBC news report notes that the video shows “agitated pigs with open sores in tiny cages, adult animals being euthanized using bolt guns in the head and piglets being euthanized by slamming them against the floor.” The original video can be watched at PigCruelty.ca.

“Sadly, it is not surprising that slaughterhouses have degenerated into what we witness in the Mercy for Animals Canada video,” said Larry Rousseau, Regional Executive Vice-President of the PSAC in the national capital region. “The ongoing elimination of federal regulations and the shortage of inspectors, and the reliance on industry self-regulation inevitably leads to such abuses. We need to prevent another XL Foods-type crisis.”

Research by FoodSafetyFirst.ca calls for the hiring of 1,000 additional inspectors and an immediate moratorium on industry self-policing in order to ensure safe food for Canadians.

PSAC members undertaking today’s direct action call on Loblaws to commit to pressure the federal government to meet these demands, in addition to ending the practice of gestation crates in Canada, as requested by Mercy for Animals Canada.