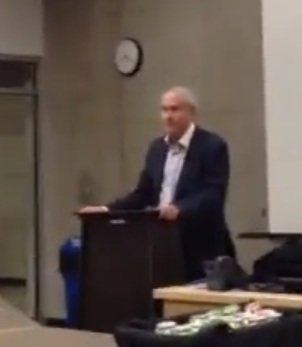 CFN – What was Tom Flanagan thinking as he engaged a crowd?  Was it wit?  Was it arrogance?  Was there a cute boy in the crowd that titillated him?

This video has gone viral on You Tube and Mr. Flanagan has subsequently lost gigs as fast as we’re losing advertisers here in Cornwall Ontario!

Poor Tom has now lost a few plum gigs and I’m sure is being ostracized than myself at a Cornwall Chamber of Commerce event.   Is it right or wrong?   I think it has to do with human nature and the conformist culture we live in.

And that’s part of the price of being in certain positions in life.  If you want the cash and power that comes with lofty job titles you have to give up publicly speaking to certain things even if you believe in them as apparently Mr. Flanagan does.

I will disagree with you Tom.  Look at American TV & Movies.  The public has been exposed to more and more violence and the US is now a more violent country.    I don’t carry cable or satellite TV any longer.   While at a friends they had a crime show on where someone’s car was stuck in the mud and churned up a human face splattering the man trying to push the car out.

While Mr. Flanagan has done the politically correct mea culpa and apology he’s learned a lesson that many already learned and that while we live in a democracy opinions do count and can get you in an awful lot of trouble.  Maybe not the kind of trouble a city councilor gets for ripping up protest signs in the doorway of a council chamber, but still an awful lot of trouble.

What do you think Canada?  Do you think Mr. Flanagan should lose his gigs for his opinions?   You can post your comments below.