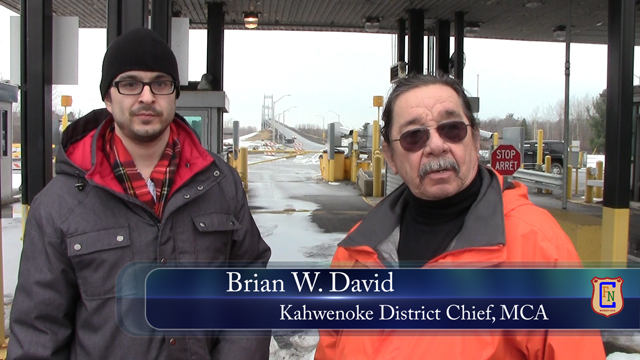 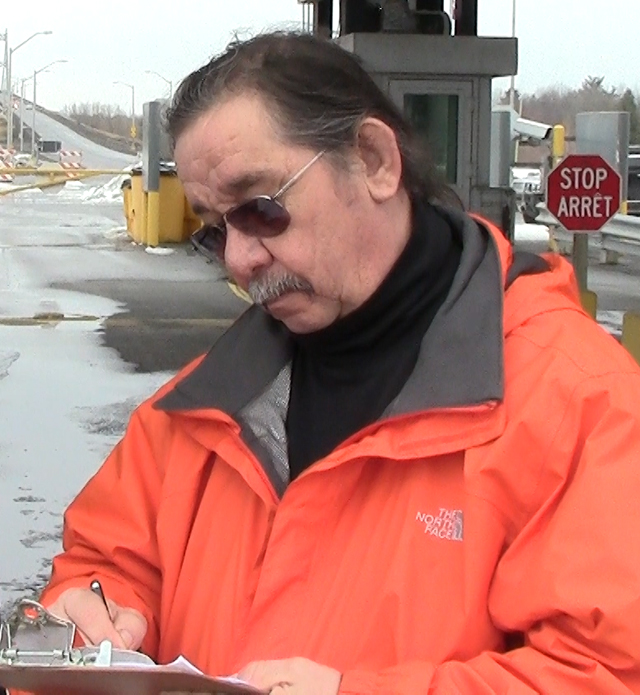 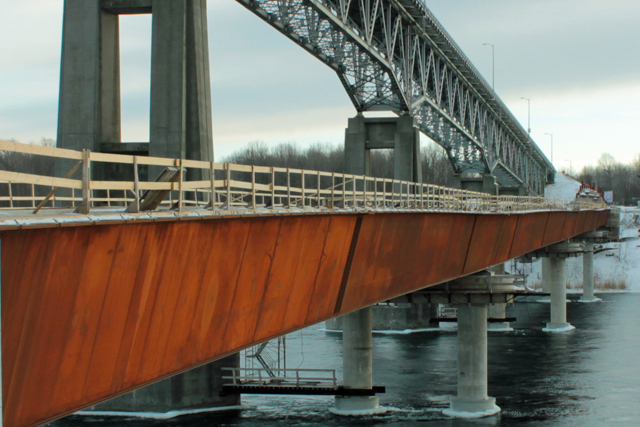 CFN – In 2009, a disagreement between Canada Border Services Agency and residents of Akwesasne (alternately spelled Ahkwesáhsne) resulted in the CBSA temporarily re-locating the Canadian Port of Entry to nearby Cornwall. The temporary situation became a long term pain for natives and non-natives and one which has negatively impacted the impression of travellers passing through Cornwall.

With the construction of Cornwall’s new low level bridge nearing completion, once again attention is turning to the concern over the future location of our Port of Entry.  Will it be at the foot of the new bridge in Cornwall?  Will it share space with the U.S. Port of Entry in nearby New York State? Or will an other option be chosen.  Atahontsison, a resident of Cornwall Island and spokesperson for  Idle No More Ahkwesáhsne, is advocating that CBSA return to it’s abandonned Port of Entry on the Island.

Speaking of “the Island”, a term frequently heard in the Cornwall area in reference to the community of Akwesasne, our viewers may be interested to learn that Akwesasne or “the Rez” is a much larger area than Cornwall Island that includes two Canadian enclaves along the south shore of the St. Lawrence River as well as a series of non-bridged islands on both sides of the Ontario/Quebec border.  And that’s just the Canadian portion of Akwesasne.  A very large area of the reserve lies in New York State, a small portion of which is visible to those travelling along State Highway 37.

The St. Regis and Snye districts are physically in Canada and part of the province of Quebec by virtue of the fact that they lie north of the 45th parallel, an invisible line which constitutes some parts of the Canada/U.S. border.  However, it is impossible to access either of those two regions by land without first travelling through New York State.  Each of these districts sits on the northern tips of small peninsulas along the south shore of the St. Lawrence River.  One passes from St. Regis NY to St. Regis QC by driving or walking a single step along the main road.  In the Snye area, a maze of roads, some of which converge at a point known as Spaghetti Corner, criss cross the New York and Quebec parts of the Snye.  At one time a small border house stood in the Snye, but has long ceased to exist.  Close family members live on both sides of the international border which bi-sects their community. Our map above illustrates how the community of Akwesasne criss crosses provincial, state and the Canadian/U.S. international boundary. Some refer to it as a jurisdictional and practical nightmare.  In Akwesasne, we’re dealing with two Canadian provinces and one U.S. state, two countries and four counties as well as multiple telephone exchanges and three dioceses. On the U.S portion of the reserve, NY State Hwy 37 runs through parts of it.

As if all of this were not enough to create a sense of disjointedness, having the Canadian Port of Entry in Cornwall effectively isolates residents of Cornwall Island from the rest of Canada.  They cannot leave the Island without passing through Canadian Customs (even though travelling within Canada) or  through the U.S. Customs.  In the words of Atahontsison, he feels as though he’s caged in.  The Cornwall Island resident points to Section 6 of the Canadian Charter of Rights and Freedoms which guarantees mobility rights for all Canadians travelling within the country.

“Right now there’s a checkpoint in the middle of Canada.” Atahontsison, Resident of Cornwall Island and spokesperson for Idle No More Ahkwesáhsne

Our exclusive video clip provides some real insights to the physical lay of the land in Akwesasne and the impact of the border and Port of Entry on the people of Akwesasne and all who travel through the territory.  Kahwenoke District Chief Brian David had CFN witness his signature on the petition dealing with relocating the Canadian Port of Entry.

On Saturday, March 23 starting at noon, Idle No More Ahkwesáhsne will conduct a demonstration to address this border problem for the people of Akwesasne and to show resistance to those that they feel are trying to infringe on First Nations rights and privatizing their natural resources by endangering the water. There will be petitions to sign – one petition opposing omnibus bills that have an effect on First Nations and the environment and one stating that they want the Port of Entry moved to a place where it is not violating the rights of natives and all Canadians. Organizers point out that this will be a peaceful demonstration, so all are asked to please come on out with a good mind. All nations are welcome. We’ve been asked to assure CFN viewers that there is no intention to obstruct the flow of traffic that day; this is an opportunity to stand in solidarity.

Brian David is District Chief for Kahwenoke (Cornwall Island).  David elected to be the first person to sign Idle No More Ahkwesáhsne’s petition concerning the Cornwall Port of Entry in an effort to support the initiative to re-establish dialague among the people of Akwesasne, residents of the neighbouring areas and CBSA.

“It gives me pleasure to be the first to sign this petition … The CBSA has never really known for sure how thick the ice was in terms of whether or not they’d be welcomed back. I think this is a good time to take the pulse of the community … to make that determination.”   Kahwenoke District Chief Brian David, MCA“

UPDATE: Take our (unofficial) poll:
When the current north span bridge is replaced by the new low level bridge, should the Canadian Port of Entry in Cornwall, ON return to its post on Cornwall Island?
[emailpetition id=”3″]
[signaturelist id=”3″]