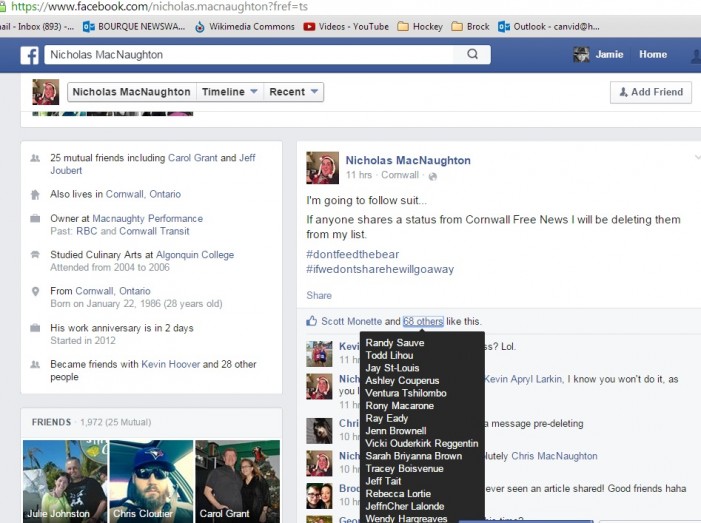 CORNWALL Ontario – Sometimes you have to out a troll clearly.   On the left is one Nicholas MacNaughton.  Mr. MacNaughton is a special kind of troll.

His hatred has lasted several years now and his energy in attacking CFN and myself seem to be his occupation.  It probably started when he started to date a particular young lady with a history related to a City Councilor that isn’t a CFN fan.

When he, like many others, fell for our April Fool’s joke a few years ago he went prattling on facebook about how awesome it is that CFN was gone, etc.

I handled him like I would a heckler and he lost his marbles to the point of telling people that he was going to physically harm me.  In fact I was cornered by himself, the female in question and her mom at an event at the Port Theatre.  It was a bit surreal, but no physical blows were struck and I didn’t lay charges.

However this troll started to go after my clients. In fact, one, lawyer Milena Cardinal, specifically told me that at a lunch while he was working for CIBC as a mortgage broker, that he implied that she’d get more business if she’d drop CFN.   She did that shortly after and ended up getting a $25K Heart of the City loan for her office on Adolphus Street which certainly isn’t in a commercial zone that the plan was intended for.   Ms Cardinal shared that Mr. MacNaughton had admitted to her that he in fact had gone to several businesses and suggested the same, that they should dump their advertising.

Irony is that when Nick was in trouble and upset with the Freeholder he came to CFN for help and we successfully assisted him.

Now he seems to have his undergarments in a bind and is on the war path again. In Cornwall this sort of thing means he’s trying to get something from the cliques, usually a job or gig of some sort.   Brownie points, like when Gaye Adams took a run at me during the election.

As after reading the page of drivel I thought, what if I shared with CFN viewers the list of people that subscribe to Mr. MacNaughton’s thought process and what businesses they own or where they work?

Recently we came to the defense of the Vincent family’s ice rink.  As of print time nearly 2,000 people signed our petition, over 3,000 voted in our poll(with 96% wanting to support the rink) and over 2,500 liked our story on facebook.

It’s amazing when people work together and tragic that such a small group can cause so much grief for the community.  Clearly reading the list below you can see some that have an agenda as they are with competing media. Competing for eye balls and for ad dollars.   Some in the list are just along for the ride and following a mob.

Clearly this move by Mr. MacNaughton and his supporters isn’t working at that level, but if you own a small restaurant or business and  you get a few phone calls or complaints you just might not advertise or pull an ad.

We’ve seen that with a few small businesses.  Sadly one is closing this January because these little trolls aren’t a solution.  Most aren’t even clients except rarely for a bit after they get their way.

So here is the list of those that clicked like so far for Mr. MacNaughton’s little theory.   We are not advocating boycotting them, but I think it’s fair that the public know who it is that’s trying to destroy CFN with a campaign of bullying and lies and those that support them.

Mr. MacNaughton states that he owns McNaughty Performance.  Not sure if he’s still at CIBC?  We’ll only be posting what is public information or what we know first hand.

Gil E
What do you think dear  CFN viewers?  Is it time to stand up to strange and naughty behavior like that exhibited by this group?  What triggers this sort of mob madness?  Is it ignorance? Jealousy?  Trying to gain brownie points?
Why rip down in a community instead of work together and build everyone up?   Frankly the biggest action that can be done in this city is if local business kicked back and bought ads on CFN to stand up to mobs like this.  You now are seeing a glimpse of the minority that think and behave in this manner.  They now are getting their few moments of fame on CFN which maybe what some of them simply wanted in the first place.
This month, and it’s not over, CFN has had 67,392 unique vistors (over 40% from Cornwall) 244,042 visits comprising 1,256,006 human page views.  Clearly not all of Cornwall or the region agree with this motley crue’s opinion.   The question is simply then why not ignore CFN if you hate it that much?  Why go to lengths to try and coerce or force others?  Isn’t that a li’l crazy?
And the funniest thing is that Mr. MacNaughton and his supporters actions will ultimately give CFN more viewers.  Congrats Todd & Denis.  Keep up the good work for TC  Media!
You of course can post your thoughts and comments below.
Images: Facebook

CFN Exposes a Little Group of Trolls in Cornwall Ontario Who Want You To Stop Reading Us by Jamie Gilcig 29/1/14 added by admin on December 29, 2014
View all posts by admin →