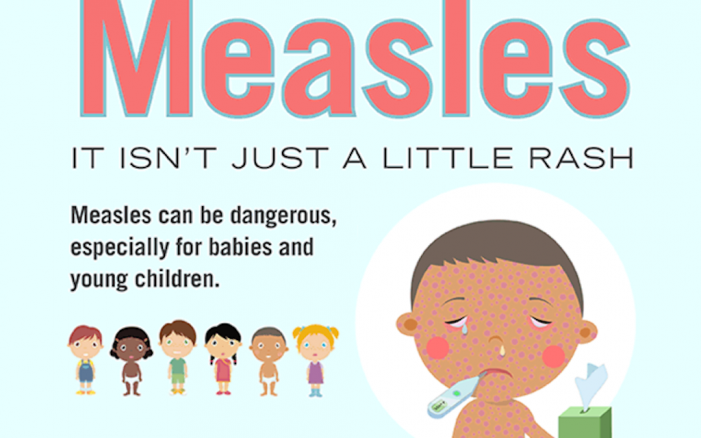 has me on edge.

In case you haven’t heard, 41,000 children and adults across Europe were sickened – between January and June alone – 37 people are dead, and the outbreak isn’t over yet.

Beyond imagining the great human suffering (I and my six sibs all had measles) there are three reasons I’m having such tortured thoughts.

First, the outbreak in Europe shows exactly what can happen when vaccination rates fall below the optimum 95 per cent needed for herd immunity that further protects society’s most vulnerable, such as babies too young for vaccination.

Measles is also highly contagious, so much so that Dr. David Curran, a research fellow at The Hospital for Sick Children in Toronto, tells me that a person with measles would end up infecting, on average, 14-17 other people if everyone around them was susceptible, adding:

Moreover, “In vaccinated people, the immune system is primed so it shuts reinfection down fast, before the virus can cause disease and spread,” explains Dr. Sue Rodger-Withers, a now retired virologist who spent her career at the Fairfield Hospital for Infectious Diseases in England.

No magic needed. Vaccines are highly effective tools that Dr. Sarah Wilson, a physician at Public Health Ontario, reminds me are tested for safety from the moment they are considered, up to the time they’re approved (by regulatory authorities) then monitored continuously over the lifetime of their use.

Second, I’ve had it with the spreaders of vaccine-related lies, told by people so clearly addicted to their own minor celebrity on social media that they continue to repeat tired (though dangerous) conspiracy theories to scam people into believing all kinds of nonsense including that measles and other vaccine-preventable diseases aren’t serious diseases. (Bollocks!)

And third, measles was declared eradicated in Canada in 1998. But if we continue to go the way of the US, with pockets of low measles immunization where diseases can establish a foothold, we could see outbreaks like last year’s in Minnesota, the Disneyland outbreak of 2015 and others. Remember, measles can be brought in by travellers from countries where the disease remains common. And measles can be contracted while travelling with unprotected kids outside of Canada.

A pharmacist I spoke with for the story shared:

“Everyone should have the MMR vaccine. People can’t afford the ‘luxury’ of not getting vaccinated simply because they’ve never seen a case of measles. The reason they’ve never seen it is because we’ve been so good at prevention. But if the trend of wanting to get away from the MMR vaccine continues, we’re going to be in a position of reacting to a very serious problem.” Look, I’m a layperson. I hadn’t even intended to put my voice in this story but feel I have to use what

I’ve got. I’ve seen polio. I’ve seen a friend’s mother lose her mind after her baby died of whooping cough. Left is a photo of the scar left by my own tracheotomy, an emergency procedure performed in the middle of the night as a result of having contracted H. influenzae type B at age four. The infection, in my case, caused epiglottitis and near-fatal closing of the windpipe.

Today, parents can protect their children with the Hib vaccine.

Among the reasons I’m including this personal information is that it is my hope that any parent who might understandably feel hesitant about vaccines – given all the noise out there – will talk to a healthcare professional; a doctor, nurse practitioner or pharmacist. Or contact their local public health office. They’ll listen respectfully to your concerns and provide the help you need.

But I would also encourage parents not to be drawn in by ideas that homeopathy (including nosodes) or chiropractic can replace vaccines. There is no such thing as a vaccine replacement.

Back in June, pharmacist Graham Mackenzie of Baddeck Nova Scotia was making headlines across Canada for banning homeopathic products from his pharmacy, so I contacted him.

“I have to sleep at night and my first responsibility is to do no harm. Meaning, if I sell something to a customer there should at least be some evidence that it can produce an effect, pain reduction for example. So, if homeopathy inadvertently does harm because a toddler remains in pain, or has an underlying health problem that remains unaddressed it’s not ethical. How can it be?”

I personally applaud Graham Mackenzie’s move. Homeopathy isn’t an herbal thing. Herbs can actually have a medicinal effect. Homeopathy is water (or water and sugar) said to have the ability to remember an ingredient that has been completely diluted out – a piece of rock from the Berlin Wall for instance or rabid dog saliva. You can look those examples up.

But if you have further curiosity, here’s a link to “Drugstore Remedies: Licence to Deceive,” which was produced by CBC’s Marketplace:

Is there any good news about vaccines? Yes!

According to the most recent Stats Can data, the vast majority of Canadian parents agree that vaccines can safely and effectively protect their children from infectious diseases, even while “hesitancy” is not uncommon. Vaccine hesitancy isn’t a criticism by the way. In fact, it’s nothing new. Even the famous Ben Franklin – who among other things was a brilliant scientist and an inventor – laments in his 18th century autobiography that failure to inoculate his son was a mistake. The boy died of smallpox at the tender age of four and Franklin urges parents to “choose the safer.”

After reading about Ben Franklin, I recalled a similar moment of clarity at age 13. Learning that a friend’s Arabian was suffering from lockjaw, and after the poor mare’s misery had ended, I mentioned the tragedy to another friend who snapped:

“She’s an idiot! Her horse wouldn’t be dead if it had had just a tetanus shot.”

Knowledge is power. Please get it from a trusted source.