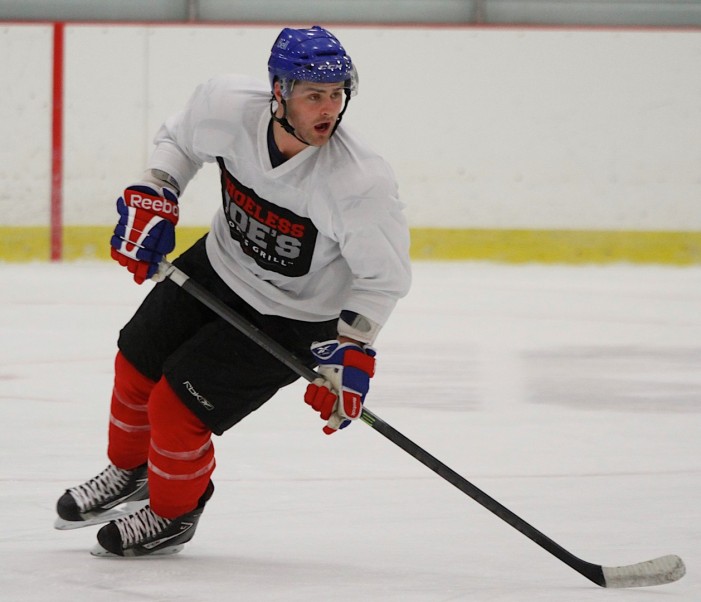 Cornwall Ontario –  The River Kings have added another former NHL draft pick, coming to terms with Stephane Chaput. The 25-year-old centreman, who suited up for 212 games in the American Hockey League over the past five seasons, is expected to be in the lineup on Sunday afternoon when Cornwall hosts Sorel-Tracy. The Montreal native was […]

Have you bought your Tickets for the River Kings Home Opener on Saturday October 26, 2013 Yet Cornwall Ontario?

Cornwall Ontario  – The River Kings are set to host the defending champion Jonquière Marquis on Saturday night. And one of Cornwall’s biggest fan’s – head coach Dean Lygitsakos – is happy to be coming back to the Seaway City. “Cornwall was a priority for the league this off-season and we support the new ownership,” […]

Cornwall Ontario – The River Kings have added more depth to their blueline. And it’s a familiar face to local hockey fans. Mathieu Raby has come to terms with the River Kings. The former Cornwall Comet adds plenty of size and toughness to the Kings defence. Raby last played with the Akwesasne Warriors of the FHL […]

Cornwall Ontario – After opening the LNAH regular season with three consecutive games on the road, the River Kings are finally set to host their home opener on Saturday night. And a spectacular evening is planned for Cornwall fans. The River Kings host the defending champion Jonquiere Marquis at the Ed Lumley Arena. The puck […]

CFN – You can add three more names to the ever-expanding River Kings roster. Newly acquired centre Bobby Mazerolle, forward Patrick Lapostolle and goaltender Matthew Murphy have all come to terms with the team. Mazerolle was acquired during the off-season in a deal that sent goaltender Fred Piché to Jonquière. Last season with the Marquis, […]

After several days of uncertainty, the Ligue nord-américaine de hockey announced today that the Cornwall River Kings will undertake the 2013-2014 season. The Commissioner of the LNAH, Michel Godin, met a group of investors Tuesday evening in Cornwall. After several hours of discussion, an agreement was reached between Bernard Villeneuve current owner and the business […]

CFN – Cornwall Ontario River Kings owner Bernie Villeneuve this morning confirmed that the team is 90% sold after a night of discussions with the new group of four owners and league officials. He stated that he’s been sworn to secrecy, but is expecting the new ownership to reveal themselves and the deal later today. […]

CFN – Liz Leduc was peddling her bike all over Cornwall this weekend getting people to sign the petition to ask the City of Cornwall to stop adding fluoride to its drinking water. Fluoride Free Cornwall will be gathering signatures for a petition to end water fluoridation outside of city hall (360 Pitt), on Monday, […]

Here we are Cornwall a small town population of a little under 46,000. Yet we have a good product that seems to be slipping out of our grasps once again. Why you ask? Why are we doomed to such failure? There are many factors needed to be taken into serious consideration. First there is how […]

CFN – Bernie Villeneuve was still working hard today.   The owner and face of the Cornwall River Kings was pressing the flesh and getting petitions passed out to area meetings.   He’s hoping that somehow the public coming to city council Monday night in Cornwall well somehow tilt something that will help resolve this […]

I say Boycott the Cornwall Colts Until the River King Issue Is Resolved. Play Nice or Don’t Play at All by Jamie Gilcig

CFN –  I love Hockey.   I’ve worked in hockey.   I traveled with the Old Timer’s Legends teams; Marty Brodeur, the greatest goalie to ever play in the NHL did his first Autograph Signing session for my company.  I’ve created Hockey cards!  I’ve seen things. I don’t get why two very different teams can’t […]

CFN –  Bernie Villeneuve was looking forward to the new Valleyfield team in his hockey league starting this season in what would be the perfect rivalry.  Sadly however his future as team owner has become one hot mess as the owner has vowed to stay in front of City Hall until Monday’s Council meeting after […]

CFN –    I spoke with Rick Lapierre of the Cornwall River Kings this morning prior to the press conference about what’s happening with the team. Mr. Lapierre was upset at Seaway News coverage which he termed inaccurate.  He stated that he has nothing against Mayor Bob Kilger, but the terms and conditions at the […]