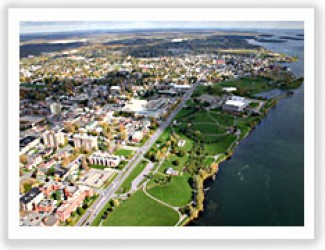 AKWESASNE MOHAWK TERRITORY — Earlier this week, Cornwall City Council considered a proposal to form a special committee that will work upon acquiring federally owned lands on the north shore waterfront located between the neighbouring communities of Akwesasne and the City of Cornwall. The proposal was deferred by City Council in order to determine Akwesasne’s interest in participating in this effort, as recommended by government officials several years ago during previous attempts to acquire lands known as the Port of Cornwall.

As a result of this development, the Mohawk Council of Akwesasne’s Grand Chief Mike Mitchell has issued the following statement:

“The Mohawk Council of Akwesasne has recently learned that Cornwall’s City Council has expressed its continued interest in acquiring and developing lands owned by the Government of Canada, located on the north shore between the communities of Akwesasne and Cornwall. Since learning of the federal government’s desire to divest the Port of Cornwall in 2003, the MCA has viewed this as an opportunity to partner with the City of Cornwall for joint economic initiatives involving the development of the Port.

The MCA remains committed and willing to follow the federal government’s divestiture program for the Port that is based on inclusiveness and cooperation. The federal lands would be divested through a similar process experienced elsewhere in Canada that would contemplate a joint partnership that would have representation from the local municipality and the First Nations community.

As expressed on numerous occasions in this matter, our communities are in a position to collaborate on joint initiatives that will result in economic opportunities and other benefits for both of our communities and the surrounding region. We look forward to working closely with the City of Cornwall to realize the economic benefits of the Port.

In the same manner as contemplated with the Port of Cornwall properties, the MCA extends its partnership development interest to other north shore lands lying between Cornwall’s Lamoureux Park and the Robert Saunders Dam to the west.”