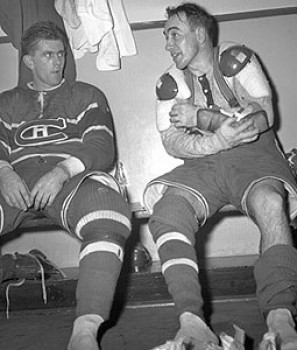 Cornwall ON – The Montreal Canadiens showed why small teams have difficulties with Play Off Hockey last night in their 4-2 loss to the New Jersey Devils.   In the play offs the amperage is upped.   Skating room gets shrunk; hits get harder, and the intensity and wear and tear are felt more as the grind of this type of game needs a lot of grit and endurance.

I remember when I worked for the Habs that the video tracking system I had created and was being used to help beat the Stanley Cup defending NY Rangers showed a smaller Habs team slipping.   Montreal had surprised the hockey world by stealing the first two games.   We had exposed a lot of little weaknesses and combined with the opening burst of energy the results were positive.

Then the bigger Ranger team starting grinding the smaller Montreal team which simply didn’t react enough to compensate and we lost the series 4 games to 2.

Last night the Devils opened strong and the first period saw some great back and forth action and a Hal Gill fight against David Clarkson.

Then things slowed down.    0 Shots by Cammalleri, Pouliot, and Markov didn’t help and in the meanwhile Ottawa clipped the Panthers 3-2 and added some breathing room between them and the Habs.

Phoenix clinched a play off spot last night.   I guess Wayne Gretzky really did suck as a coach after all….

If Montreal isn’t careful they’ll have to open the play offs against Pittsburgh which is not where they want to be this season.

What do you think Hockey Fans?  Feel free to post your comments below.