Our reviews, endorsements, endorse NOTS, and predictions for the Cornwall Ontario Municipal Elections for Mayor and Council – October 24, 2010 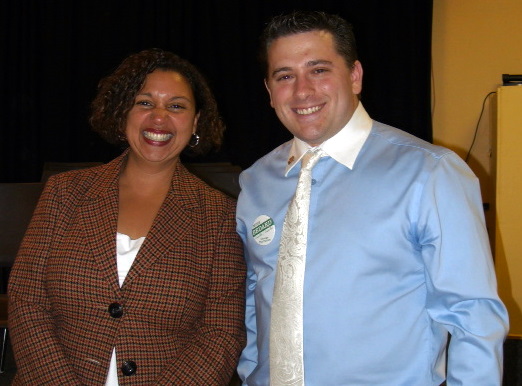 Cornwall ON- It’s that time Cornwall.   We’re going to do our wrap up and analysis of the candidates for Council and the Mayor of Cornwall.

It’s been an interesting race since that first debate at the Civic Complex.     The biggest complaint I’ve heard most from the voters and some candidates has been that there really haven’t been any actual debating going on.   Mostly it’s been presenting of platforms and answering of questions with limited amounts of time.

So how do voters know who is who and who stands for what?   Valid question.   We’re going to try and help clarify some of the mystery of this election here in Cornwall Ontario.

The biggest winners so far seem to be returning Councilor Ms Bernadette Clement and Mr. Mike Bedard who is the youngest candidate running and the only one currently running a business in Cornwall.

Ms Clement showed that might can make right.   She spent the most on advertising and probably more than half the candidates in total!    We saw, heard, and viewed a sign for Ms Clement everywhere.

Her one negative issue, which she to her credit dealt with early, was her being a Candidate for Federal office, but the overwhelming support shown to her so far looks like it will return her to Council and most likely with the most votes in this election.

Issue wise the only real spots she had during the last four years was the attempt to get the Gymnasium project back in spite of council and public rejection and having dogs in Lamoureux Park.   Her strengths were her ability to listen and try and work across the board with council and city management.

Mike Bedard, one of the candidates we endorsed here at the Cornwall Free News has taken this election by storm.  You can see his confidence growing speech by speech and more and more people became interested in the youngest candidate in the election.    He may garner more votes than any of the “Young Guns” running this year.

While stepping on a few toes with a letter to the editor about the CFIB report on Small business in Cornwall he showed a willingness to “go to the net” for what he believes in which won the hearts and probably votes of many Cornwallites.

Double D – Denis Carr and Denis Thibault.    There’s not much you can say about either veteran.  Smart, savvy, understanding how things work and how to get things done.   If you credit the current regime with succes you’d have to point your finger at these two gentlemen when it came to giving credit.

Denis Carr at the Arts and Culture Debate

Both are on the big money committees here in Cornwall and both focus on a fiscally pragmatic and balanced approach.

Mr. Carr however is the better vocalist 😉

Pat Finnerty and Patricia Lalonde.   I’m not ot sure why these people ran.    They didn’t participate much in the debates.  Didn’t attend many; didn’t say much when they did, and didn’t advertise much anywhere.    Mr. Finnerty did give us the best American Idol moment during the campaign.

Maurice Dupelle.   Well I give Mr. Dupelle credit for knowing his speech which we all got to hear an awful lot.  This I believe is Mr. Dupelle’s 3rd kick at the can in running for council.   We’ll find out Monday if Maurice is finally successful or bound to become the Susan Lucci of Cornwall Municipal politics.

The other “Young Guns”   -Jason Setnyk at 29 knocked on the most doors of the campaign.  If hard work were the deciding factor Mr. Setnyk would finish first by miles.    A school teacher at the local Hockey academy he put the most issues and possible solutions on the table.   His speaking style was a bit unpolished at the beginning of the campaign, but by the end his message was becoming more refined and clear as you can see from the video below at the Environmental Debate.

Todd Bennett had an interesting campaign.   His presentation like Mr. Setnyk’s wasn’t always as polished but he did his homework.  I had several comments come across my desk by people responding to him actually going and researching some of his points.   His biggest strength seems to be his ability to work with others.      If he was effective in getting awareness of himself and his platform to the public we’ll find out on Monday.

Elaine MacDonald on the Arts

Elaine is the biggest argument I can use as to why councilors should be paid $75,000 per year and work full time.   She ran a terrific campaign and hit all the high notes.   She didn’t miss an opportunity at any of the debates and has run a masterful campaign mixing in strong media presence with strong content.

While I feel that during the last council she made some surprising choices, such as the Glengarry Apartment Condo conversion I think that she’s a valuable asset to our city and council.   All of our charts point to her doing well in the voting.

André Rivette.   He probably will be elected again.    His biggest strengths are the behind the scenes work he does for voters.  I can’t think of any other councilor I’ve heard people go to more than Mr. Rivette for help with issues.

$700 office chairs are what Glen Grant has to think about if he doesn’t get elected to council again.  Mr. Grant ran a very weak campaign which seemed to have him depending on the people that got him there before; the Domtar vote and his Conservative ties.   It should be interesting to see if it’s enough to get him back on council.  Our numbers point to him winning again.     His biggest achievement is his leadership on the 3+1 Arena project.

Gerald Samson.   The man I’ve most heard the statement that if gets elected the person may consider moving to France.

Leslie O’Shaughnessy and Claude Poirier.   Both gentlemen are experienced and knowledgeable politicians.    Both made some really good position points during the campaign.  The question for them is that in an environment where there seem to be a lot of angry voters who want change is to whether these guys offer the change that voters want?

Mary Ann Hug –  Cornwall does want a hug.  Who doesn’t want a hug.  Hugs are warm and cosy.  They make you feel safe and loved.   Not sure if those warm and fuzzy feelings will transfer to an election win for Ms Hug?

Jim Marshall –   Mr. Marshall is making his second attempt for council.  His zero dollar campaign and the message he’s sent seems valid and interesting.   Will he get elected?   It doesn’t look good.

Gary Samler –  We endorsed Mr. Samler even though all the numbers point to him not winning.      Mr. Samler’s commitment to his issues is amazing.  His early performance was strong and he had some of the best moments in the campaign.  If he’s not elected to council it’s not his failure as a candidate more than I think the fact that the voters of Cornwall really don’t consider his issues prominently enough and those he’s fighting for just don’t seem to vote.

Syd Gardiner.   All numbers point to Mr. Gardiner not making it back to council.   Those numbers though aren’t that bad and he could just maybe squeak back in.   Mr. Gardiner’s strengths, a bit like Mr.Rivette’s just don’t get seen by the public as much as perhaps they should’ve.

Madeleine Lebrun – Ms Lebrun’s number’s seem to follow the Elaine MacDonald ticket.  She’s an amazing woman with an amazing personal story.  Do I want her making choices that impact our taxes and future of a city.   I’m thinking no as the numbers have reported.

David Murphy – The man ran an interesting campaign.   Fairly low key Mr. Murphy seemed to depend on his personal magnetism and media savvy to win over voters.   This campaign seems to be working as he’s leading in many polls and we predict that he will win a seat on council.

Nicole Spahich –   Boggling.   It’s all boggling.  One could say so much, but then would any of it make any sense?    Ms Spahich is charting 3-5 % voter support.  My questions is why are the numbers that high?

Mark MacDonald promised this wouldn’t be a boring election and he kept his word.   That’s an amazing thing for any politician.  It’s been an interesting campaign for the former firefighter.    His numbers show that he could as easily win as lose and that’s a tribute to the amount of work he and his team have done.

Sometimes in hockey the best team doesn’t win.  The richest team doesn’t win.    Mr. MacDonald had two former mayor’s publicly supporting him, Brian Lynch, and Phil Poirier.    That says a lot and Mr. Lynch’s hand took a scrappy politician and polished his game to the point that Mr. MacDonald is on the precipice of possibly being addressed as “Your Worship” after Monday October 25.

He’s had more people at his events.  He’s had immigrants publicly show their support and small business.   He’s had loud and vocal support.   Does he have the big blocs of voters?  That’s something we’ll only find on Monday.

Mayor Kilger at his office opening

The biggest question was did Mayor Kilger’s team do enough?  He had the stars.  He had the big money support.  He had more web traffic on his website that features endorsements by many of the city’s shining stars.

He’s the mayor of city that even during a world wide financial crisis has grown, and is the marvel of Ontario.    He’s had basic peace among the city employees, management and his own council.

Yes there are some weak spots, but many politicians would be envious to be in the position that Mayor Kilger found himself coming into this election.

Handicapped by the duties of mayor and a feeling against incumbents across the board presented problems and issues that voters here in Cornwall will decide if were addressed or not.

It was interesting to see Mayor Kilger zoom up and pick up momentum as Monday approaches.  He visibly had more support from council candidates than Mr. MacDonald did which probably won’t hurt either.

Mr. Kilger suffered a surprise loss for MP which led to his overwhelming victory as mayor of Cornwall.  It will be interesting to see if he and his teams efforts lead to victory or to disappointment on Monday.

Candidates we have endorsed over the last six months:

Candidates we have endorsed NOT over the last six months:

Mayor’s race – Too Close to Call

Councilors we project to win:

that’s 8 – the last two spots are just too close to call.

Who do you think will win Cornwall?  You can post your comments below.

26 Responses to "Our reviews, endorsements, endorse NOTS, and predictions for the Cornwall Ontario Municipal Elections for Mayor and Council – October 24, 2010"