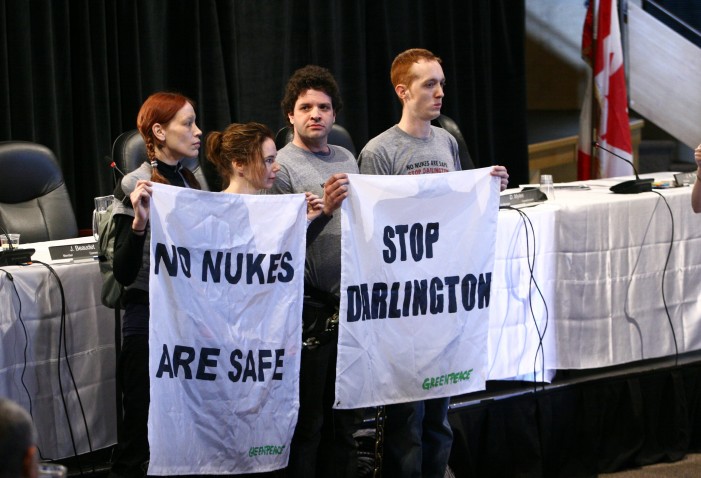 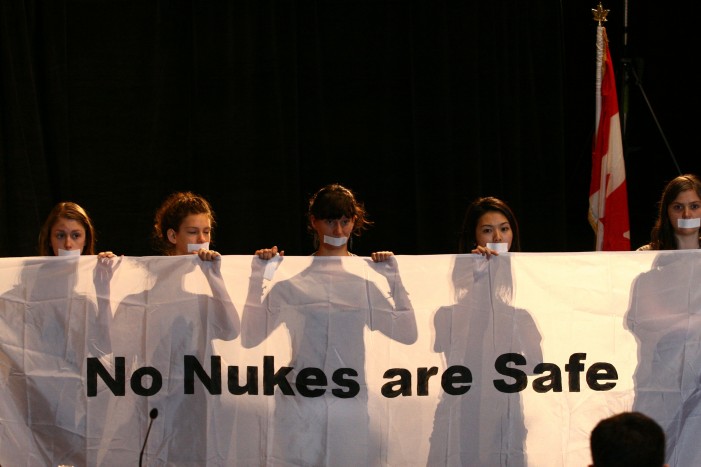 Courtice ON – Greenpeace members are delaying the hearings for an expansion of the Darlington Nuclear facility at Hope Fellowship Church 1685 Bloor Street, Courtice. The Japanese crisis is fueling the protest and Canadians fears not only of Nuclear power in general, but about safety and precautions to protect people from current facilities such as Ontario Power Generation’s Darlington plant. At the root is the request from several Environtmental groups wanting hearings delayed until more can be learned from the Fukishima explosion and radiation leakage which today was reported to have reached British Columbia.

““They’re just bearing witness to the fact that these hearings are moving forward while ignoring one of the greatest threats to future generations of Ontarians – that is, a Fukushima-scale accident,” he said.”

Promotional Videos for Nuclear Plants in Ontario by OPG

Here is the release from Greenpeace.

Greenpeace activists today shut down environmental assessment hearings on a proposal to build new reactors at Darlington in response to the Joint Review Panel’s refusal to suspend the hearings until lessons are learned from the Fukushima nuclear disaster in Japan.

Watch the action live on Qikhttp://qik.com/gpcqik/videos

First photo from the action on Twitter:http://www.twitter.com/greenpeaceCA

Four Greenpeace activists, with a banner reading “No nukes are safe Stop Darlington,” are locked down at the front of the hearing preventing the Panel from continuing. Other activists are in the audience with a similar banner and wearing tape on their lips, symbolically bearing witness to a flawed hearing process.

“These hearings should not be allowed to promote building new reactors while downplaying the nuclear disaster at Fukushima,” said Shawn-Patrick Stensil, Greenpeace nuclear analyst.  “The proposal to build new reactors is Dalton McGuinty’s proposal: he needs to take responsibility for the costs, the accident risks and for not suspending the hearings.”

Yesterday, about 40 individuals and groups participating in the three-week hearings called on the Joint Review Panel to suspend them until further analysis of the nuclear disaster at Fukushima is available for consideration. The Panel refused.

The environmental assessment proposal for building new reactors at Darlington has serious flaws, including:

“The rush forward to build unnecessary and expensive new reactors will expose hundreds of thousands of people and generations of Ontarians to the risks of a Fukushima-scale nuclear accident,” said Stensil. “The proposal will create more radioactive waste that will be dangerous for millions of years. New reactors at Darlington can’t be permitted to proceed when the impacts and alternatives haven’t been considered.”

We’ll be updating this story as more comes in.