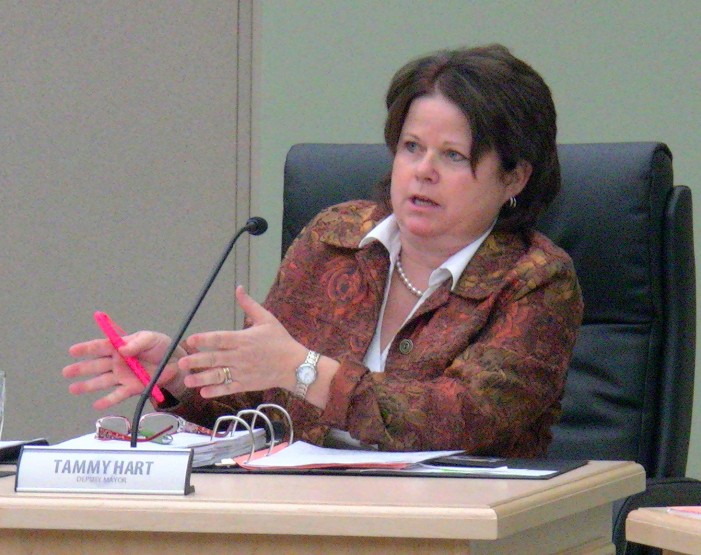 Long Sault ON – South Stormont Deputy Mayor Tammy Hart surprised her council counterparts by announcing Wednesday night that she could no longer support the proposed Canadian Bio Pellet plant set to be built in Ingleside Ontario.

The evening started out well enough with South Stormont receiving a cheque for $5,000 from Budget propane.

But the evening soon started to focus on the recent 8+% tax raise passed by the United Counties council on which both Mayor Bryan McGillis and Deputy Mayor Hart sit on.

The Stasko Brothers Bio Pellet plant which has received government funding still has not been started due to the economic downturn and investor concerns.

Councilor Richard Waldroff had this to say about the OPP and Pellet Plant.

Mayor Bryan McGillis also made a statement after council.

Deputy Mayor Hart emailed in the following about the OPP Fee Raise.

Rural municipalities across Ontario can no longer afford the cost of policing by the OPP.   Right now it is costing the Stormont, Dundas and Glengarry tax payers $12,000,000 a year to operate, which works out to about $182 a person.

Its too much!  Meanwhile we have roads we cant fix, and our infrastructure is falling further behind, something has to give.

and the following on the Bio Pellet Plant:

In reference to my announcement last night, I feel that we need to be more transparent with the public as well have better communications.  Myself, I am not happy with what has transpired so far between South Stormont Township and the Bio pellet plant.  My gut feeling is not good.  We are all aware that the economy is not good and that elections are in the fall, all of this is likely to have an effect on this project and the last thing I want is for our tax payers to be left holding the bag.

Its my own opinion, I do not speak for the rest of council.

What do you think South Stormont residents?  You can post your comments below.