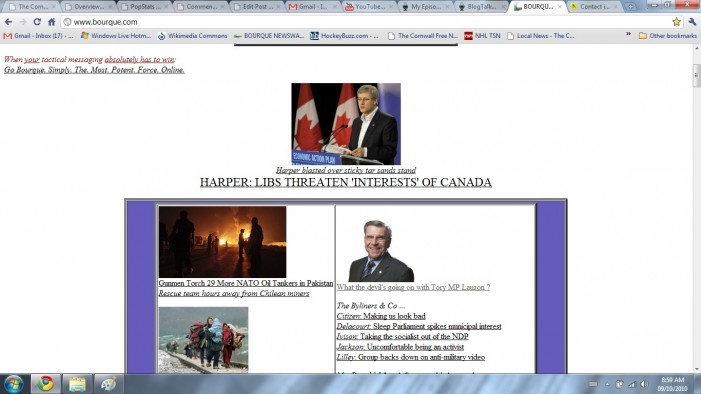 Cornwall ON – Did you know that every first of October is now “National Seniors (sic) Day” in Canada, as reported last October (unfortunately, after the fact) by the Seaway News? Most seniors probably missed this momentous event, especially with more pressing concerns such as healthcare, the ever-rising costs of food, energy and housing, and the sort of Canada we risk leaving to our grandchildren.

So, to recap, here is part of what Lauzon had to say about seniors:

“…this annual occasion is to honour older Canadians and show our appreciation for their contributions to Canada’s history and its future…. Today we celebrate and thank those who helped build our country and continue to make significant contributions to it….”

Lauzon himself is a senior citizen – he celebrated his 67th birthday about two weeks ago, and like other seniors, he also needs to worry about his own personal healthcare, and how he is going to feed and shelter himself and his family when the economy collapses under the stress of deficits and rising oil prices.

Guy, a senior himself (he turned 67 a couple of weeks ago), is personally aware of how vital pensions are to his riding’s senior citizens. Like most seniors in the riding, Guy depends on his Old Age Pension, his Canada Pension, and his federal civil service pension, especially since he has now lost his MP’s salary of $157,701 and his bonus of another $11,165 for following in the footsteps of Rahim Jaffer as chairman of the Conservative caucus. After the election, his only other income will be his Parliamentary pension.

John Rafferty, NDP member for Thunder Bay—Rainy River, introduced Bill C-501 before the House of Commons. This act would have amended the Bankruptcy and Insolvency Act and the Companies’ Creditors Arrangement Act to ensure that unfunded pension plan liabilities are protected in the event of bankruptcy proceedings. The act would also have amended the Canada Business Corporations Act to allow former employees of a bankrupt corporation sue the directors.

Simply put, this act would have protected employees from situations such as Nortel, where directors got massive severance payments, but pensioners got nothing. During the debate Peter Clement, PMP spokesman for Industry, indicated the Harper Government policy by vigorously attacking the bill, claiming it would protect the CEOs.

When the vote came, 16 Conservative MPs broke party ranks and voted to protect their more elderly constituents. However, Guy Lauzon found it was easier to support the government policy than to protect the seniors in SD and SG.