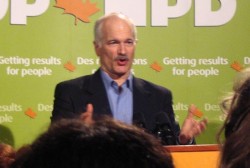 Cornwall ON – Prime Minister Layton?   In September of 2009 Mr. Layton took time from his day and granted an interview to a newbie Online newspaper.   I’m sure he had much better things to do, but he gave us a shot and it was an amazing interview.

I was truly amazed at how different he was chatting on the phone than from his public persona; not that he has a bad public persona, but without lights and a microphone I think he was able to be a bit more himself.

As a rookie it was a coup for us and of course Mr. Harper and Mr. Ignatieff could not ever find time (Mr. Ignatieff had four shots to give me or one of our team a few minutes including his visit to Cornwall) It also gave me a brief insight to how Mr. Layton has become so popular.

No “Cone of Silence”  no walls; no cold faced psychophants with ties too tight controlling media questions to the point of neutering us.

One of the things he was most proud of was that each election he led his party the seat total rose.  Now Mr. Layton is on the precipice of the biggest seat total in NDP history.

If you have watched his leadership as well he hasn’t gripped his team on short leashes the way Mr. Harper has either.  He’s allowed people like Outremont MP Thomas Mulcair to weave their magic, and he’s opened the doors for Canadians to see that Quebecer’s really are a part of Canada and proud of their Canadian heritage.

The Orange surge has bull dozed Quebec according to the polls; a slap at the Bloc who recently wheeled out Jacques Parizeau to all but finish them in the province if the polls pan out.

Speaking of which here is the latest from EKOS.

While growing up my father always told me that in Quebec people usually sit back and then vote for the winning government.  It’s as though they have a gene and instinctively know how to vote whether it be for Pierre Trudeau or Brian Mulroney, or Jean Chretien.

According to the numbers released by Frank Graves it looks like Quebec has given the nod to Thomas Mulcair and his leader Jack Layton, and that Canada seems to be following.

There’s a Chinese curse about living in interesting times.    May 2, Canadians get to make their choice, and things sure won’t be boring in this election.