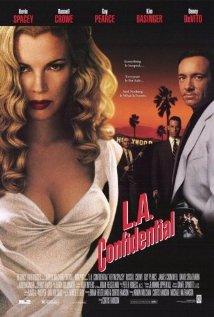 It was summations for charges laid on two of Cornwall’s finest by Edgar Ethier over allegations that he was roughed up after being charged with impaired driving.

Sergeants Scott Coulter and Troy St. Germain were in court along with Mr. St. Germain’s wife, mom, and mother in law.   It was an interesting read.

The screen play writer in me was intrigued.  It was all too LA Confidential. Sergeant St. Germain being the rough and tumble Russell Crowe type, and Sergeant Coulter being the Guy Pearce glasses wearing do gooder who wrestles with right and wrong in the big picture kinda way.   The sleazy defense lawyer was well played by Allan O’Brien who didn’t seem to have read his notes or script much, and the female prosecutor had her moments too.   I’ve never seen file folders that matched a women’s shoes before (Plum)?

I was taught as a child that if I was ever in trouble to find a policeman.  I was taught to cooperate with officers of the law.   We need that framework to support our society.  If the police are not here to protect us who is?

This wasn’t a court case, but a hearing.   Both officers have been on the job since the day of the event back in August 2009.

The nitty and the gritty.

Mr. Ethier was stopped and taken in for drink driving.    He was ….”Lippy” as was quoted, and the police decided that they should force Mr. Ethier to strip down as they felt he was a potential suicide.   Mr. Ethier besides not being a polite citizen also urinated in a waste paper basket.

With his background and previous charges any officer of the law could be wrinkled, but there’s a line, and after watching the surveillance video, one that the public can’t see,  it “appears” that this incident could’ve been handled much better.

Mr. Ethier was dragged naked down two sets of stairs; the type of stairs with scuff guards on the edge.  He was left in his cell without treatment too.     There’s a lot of little details.

No both sides made their points and of course don’t agree with many of the issues.   Mr. Ethier hired Para Legal Jim Moak to represent him after attending the first few hearings representing himself.

What struck me about this case is the utter insanity of our system.  No wonder our medical system is crumbling.  No wonder we lack infrastructure.   This case by the time it’s done will have cost tax payers close to $300.000.00

Does that make any sense?  If you want to change the system it’s time to stop allowing these folks to charge by the hour.   Mr. O’Brien especially seemed to be padding his performance actually verbalizing a summary of his summary.  At most likely $800.00 per hour, more than many in Cornwall Ontario make in a whole week, and quite a few in a whole month, he ended up causing another day to be forced on these hearings.

I counted at least  nine people on the clock in this hearing, and keep in mind this wasn’t even the court case.   Mr. Ethier will most likely be suing the city and officers for his treatment which of course will cost the taxpayer more money.

Personally I find it all horrible.   Mr. Ethier allegedly committed a crime.  Should he profit by it?   Even if at the hands of allegedly brutal police handling? Sure he didn’t deserve to be allegedly be brutalized, but then if he hadn’t allegedly been drinking and driving and didn’t give any lip to police or urinated in their wastepaper basket (very Big Lebowski testimony on that one)

Mr. St. Germain was the chief handler of Mr. Ethier in the video presented to the room.   If he’s found grossly guilty he may lose his job, but we pay this bill.   It was interesting watching the body language of the two sergeants.  Mr. Coulter was sincere and concerned.  I think he felt the gravity of the situation while Mr. St. Germain was almost laughing at points even though his supporters showed a lot of worry.   If Mr. St. Germain is found guilty what would that say about our system when he’s still been on duty for over two years since the incident?

A lawyer I speak with said we media have to spend more time in court rooms and report on what goes on.   But can we afford to lose whole days while Lawyers drone on clicking their meters?  Is that justice?   And isn’t it time that we be allowed to video tape and shoot photos in court rooms or hearings?   Video doesn’t lie.  You can’t be taken out of context on unedited video.  You can’t hear tone in a journalists written word all of the time.

At the end of the day we all pay the bill.  And this is one bill that didn’t need to be paid.   And sadly one that those that caused it will not have to pay any of.   That just isn’t right.

The little details.  The gerrymandering of the dots and crosses of the legal system will be indicators for hearing office Robert Fitches to decide, but in the end will justice have been served? I think not.

Comments and opinions of Editorials, Letters to the Editor, and comments from readers are purely their own and don’t necessarily reflect those of the owners of this site, their staff, or sponsors.)

Summation of the Ethier vs Cornwall Police Hearings Drag on for Second Day – Does $300K in Taxpayer Dollars Make any Sense? Editorial by Jamie Gilcig – October 31, 2011 added by admin on October 31, 2011
View all posts by admin →