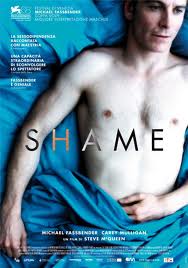 CFN – Shame is a stunningly bleak and hopeless movie.   It also is one of the best I’ve seen in the last year with not only stunning writing and direction; but truly magnificent performances by lead Michael Fassbender, Carey Mulligan,and Mr. Fassbender’s Penis.

Director Steve McQueen doesn’t sugar coat life.  This movie is dark and gritty as Fassbender searches for meaning in his life.

His apartment is sparse; his office is sparse; he can’t maintain a relationship and the only colour in his life is his sister who floats back into his life played by the delicious and supremely talented Carey Mulligan.  (can’t wait to see her as Daisy in the Gatsby remake!)

I jested before about Mr. Fassbender’s Penis, but it truly was used to juxtapose the sexual human condition and the search for love.   It’s featured prominently and frequently in the film.

There is strong nudity in this film, but it’s used to plonk home some points.  The most explicit scenes don’t include sex.  The rawness of the scenes between Fassbender and Mulligan in the opening spin direction and then cement the direction of the film.

Carey Mulligan’s character Cissy,  is also searching to feel things either through her art, singing, or hurting herself.  The search of the two leads to feel something even though they may not be sure what they are searching for connect with many people’s feeling of disconnection in society.

Shame prompts many questions.   It slaps you into awareness momentarily.    It’s a Shame that Shame was left out of the Oscar nominations, but it’s well worth a watch!

I give Shame 4/5 Popcorn boxes!