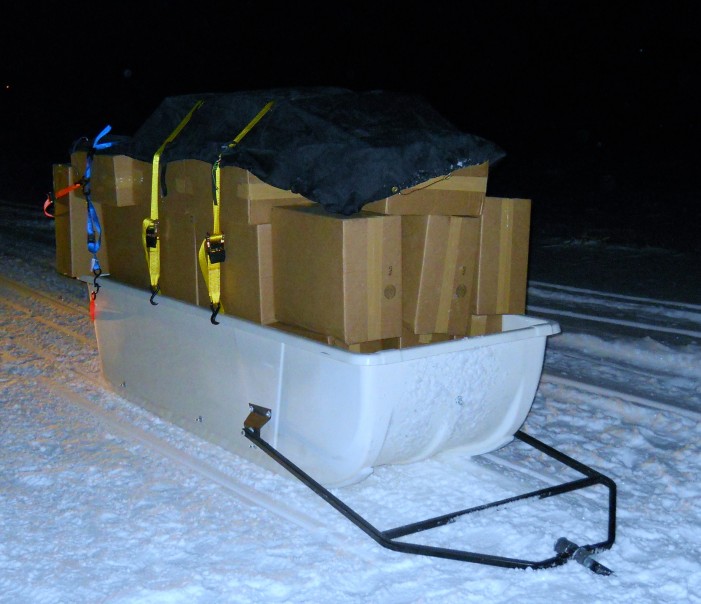 CFN – On February 7th, 2012, while conducting surveillance near the Cornwall Harbour, members of the Cornwall Regional Task Force (CRTF) observed a boat approaching the shoreline with no navigational lights. Moments later, a vehicle was observed approaching the boat.  As CRTF members approached the area, two males fled on foot.  A short time later, the two males were apprehended without incident.  Based on the investigation, a search warrant was obtained and conducted to search the outbuildings and vehicles located at a local Cornwall area residence.  During this incident, the following was seized: a 2004 Chrysler Intrepid, and 39 cases of contraband cigarettes.  Timothy MCCORMICK (age 30) from Avonmore, Ontario has been charged with Section 32(1) Excise Act and Section 145(5.1) for failing to comply with conditions of his undertaking, whereas Jason MACGREGOR (age 24) from Cornwall, Ontario has been charged under section 32(1) of the Excise Act. MCCORMICK and MACGREGOR were both held in custody pending their respective bail hearings.

.
On February 14th, 2012, Cameron James WHITE (age 22) from South Glengarry, Ontario, was charged under Section 32 (1) Excise Act after the CRTF members observed him moving eleven (11) cases of contraband tobacco from the shoreline to a nearby cottage.  As CRTF members approached the scene, they were able to follow footprints in the snow to a nearby hedge where WHITE was attempting to hide from police.  WHITE was released from custody on a Promise to Appear pending his March 1st, 2012 first appearance.
On February 21st, 2012, Tracy SHARROW (age 29) from Akwesasne, Ontario, was arrested at Cornwall’s Port of Entry by Canada Border Service Agency (CBSA) members on strength of an outstanding warrant for failing to appear for court dating back to a 2009 Excise Act investigation. SHARROW was released from custody on a Promise to Appear returning in Cornwall Court March 15th, 2012.
On February 23rd, 2012, following a short term investigation, CRTF members executed a search warrant at the residence of Gerald BRAZEAU (age 51) of Cornwall, Ontario.  During the execution of the search warrant, the following items were seized: a white 1997 Ford Crown Victoria, thirty four (34) bags of un-stamped tobacco, 34.1 grams of marihuana, and six (6) grams of cannabis resin.  BRAZEAU was subsequently arrested and is being charged with Section 32(1) of the Excise Act as well as two (2) counts of Section 4(1) of the Controlled Drugs and Substances Act.  BRAZEAU is currently in custody awaiting his bail hearing.
.

On February 23rd, 2012, while monitoring the westbound commercial vehicle traffic on Highway (Hwy) 401 at the Lancaster Truck Scale, in the Township of South Glengarry, an astute OPP officer stopped a rental cube van in the westbound lanes of traffic of Hwy. 401 for closer examination.  The cargo area of the vehicle was full of tobacco residue which police allege demonstrates that the vehicle was being used to transport contraband tobacco product.  Upon this discovery, members of the CRTF were notified to attend.  After a search of the occupants of the rental vehicle, a sum of over $61,000.00 was found on their collective persons.  One male (age 60) from Southwold, Ontario, a second male (age 25) from Hogansburg, New York, and the third male (age 41) from London, Ontario will be charged under Section 354(1) of the Criminal Code of Canada for being in possession of property obtained by crime.  The conveyance, a 2012 white commercial five-ton cube van and the $61,665.00 was seized as a result. Subjects were released from custody on their own recognizance and are to appear in court on March 27th, 2012.

On February 27th, 2012, while conducting their patrols, CRTF members observed a boat heading westbound on the St Lawrence River.  The boat was followed to area of L’Heritage High School where it stopped along the shore to unload contraband tobacco.   When approaching the area, officers observed a person boarding his vessel and leaving the location.  Members found and seized six (6) cases of contraband cigarettes.  No suspects were arrested or charged in this incident.

On February 28th, 2012, CRTF members observed a snowmobiler pulling a toboggan, filled with boxes consistent with contraband tobacco cigarette boxes, traveling westbound on the bike path near Power Dam Drive in the city’s west end.  As members approached for a takedown, the snowmobiler unhooked his toboggan and fled the scene.  Upon closer examination, members confirmed the contraband product, seized the toboggan and the 38 cases of contraband cigarettes.  The suspect in this case was not apprehended.  Photos of the toboggan can be viewed at: http://www.rcmp-grc.gc.ca/on/news-nouvelles/index-eng.htm

The individuals noted above, who have been charged under the provisions of the Excise Act  also face charges under the provincial Tobacco Tax Act for possession of unmarked cigarettes.

The CRTF continues to address the complaints of suspicious activity observed by local residents.  If anyone notices suspicious activity, they are urged to please contact the CRTF at 613-937-2800 or Crime Stoppers at 1-800-222-8477.