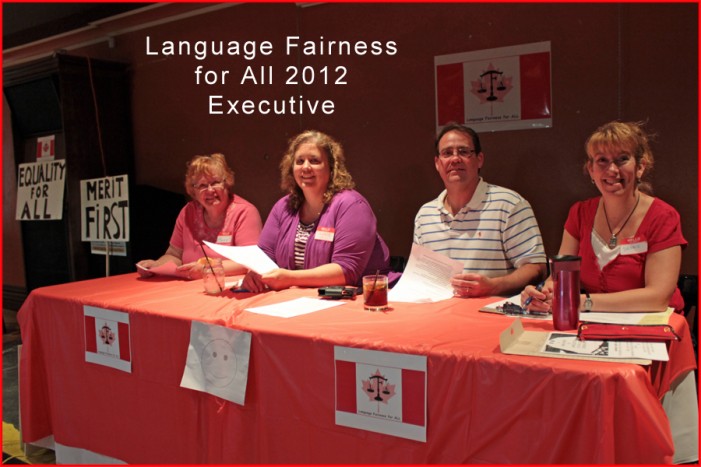 CFN – With momentum building for language fairness here in S.D. & G., the former Equality For All group, now re-branded as Language Fairness for All – LFA, held its first official public general meeting at the Spotlight Hall and Conference Centre yesterday evening.

At the head table were members of the executive:  President Chris Cameron, Vice-President Laurie Branchaud,  Secretary Debbie Cameron and Treasurer Mary Bray.  Cameron officially unveiled the group’s new logo, which is patterned after the Canadian flag.  The Canadian maple leaf is portrayed in a paler than usual shade of red to indicate that the country is in distress with democracy being replaced with a form of tyranny and the balance scale is a depiction of the group’s intention to work to restore a more balanced approach to language policy in all of Canada.

Cameron also summarized the group’s recent demonstration outside a Conservative fundraiser dinner in Chesterville at which James Moore, Minister of Canadian heritage and Official Languages, was the keynote speaker.  Cameron explained the rationale for carrying a black coffin as a sign of the death/dying of democracy in our country and of carrying the Canadian flag upside down as a sign of distress/oppression of the majority.  The group was successful in obtaining a public audience with Moore and Stormont, Dundas and South Glengarry M.P. Guy Lauzon just prior to the dinner with a promise to meet leaders of both LFA and Canadians for Language Fairness (CLF) prior to Parliament’s summer recess.  As yet, only tentative meeting dates have been proposed by Moore’s office.  Cameron indicated that he is convinced that the politicians were caught totally off-guard in Chesterville since there was no police presence, unlike the day when the group arrived for their scheduled meeting with M.P.P. Jim McDonell to present signed petitions.

Cameron and Branchaud spoke of support being received by groups in other parts of the country.  Among donations received to date was a contribution from the Ottawa-based Canadians for Language Fairness.  Cameron shared that there are concerned groups in New Brunswick (Canada’s only officially bilingual province), representing an estimated 6,000 – 7,000 people, that closely follow the efforts of LFA and who are requesting mutual support in their quest for language fairness.  According to figures presented, 70% of New Brunswicker’s have English as their mother tongue, yet 100% bilingualism has been imposed upon them.  Cameron is planning to coordinate a local delegation to make a trip to New Brunswick as a show of solidarity.

Among the twenty supporters in attendance at the largely unadvertised inaugural meeting were two of the five members of the South Stormont Council, Mayor Bryan McGillis and Deputy Mayor Tammy Hart.  McGillis said that he continues to receive many complaints from parents of young people who cannot obtain employment in the greater Cornwall area and elsewhere in Canada due to oppressive language restrictions.  Aside from mere semantics, McGillis sees no real shift in the Cornwall Community Hospital’s hiring practices.  Deputy Mayor Hart shared with the group that, at the next meeting of the South Stormont Council, Councillor Cindy Woods will be presenting a motion that the South Stormont funds which were to be directed to the Cornwall Community Hospital, be re-directed to a cause that she is mind.  Hart will be supporting Wood’s motion.  Hart and McGillis were applauded by the meeting participants for being politicians who are willing to take a public stand on important hot button issues.

As the meeting drew to an official close, words of thanks to LFA organizers were echoed from the floor, including a comment from Brent Cameron that:  “This is long overdue!”

LFA has established a formal web presence at www.languagefairnessforall.org and plans to add a great deal more content in the days and weeks ahead.  A number of public events and fundraisers are in the planning stage, news of which will be posted online.  The next public general meeting is scheduled for 7 p.m. on July 3rd, location to be announced.