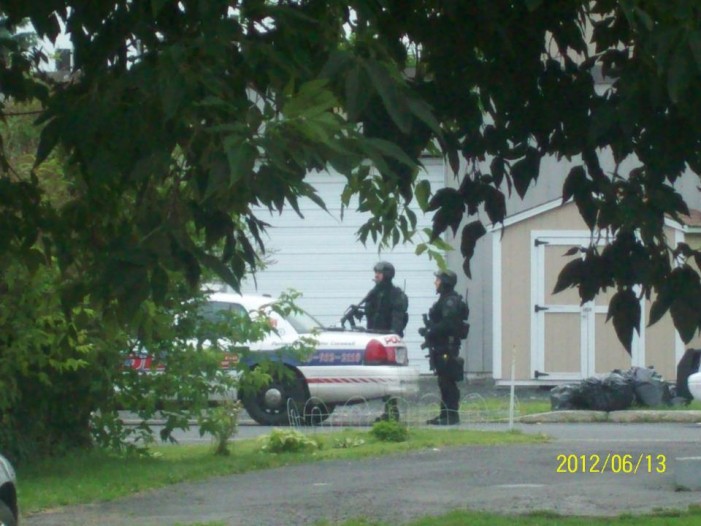 Cornwall, ON- The Cornwall Community Police Service cordoned off a section of the City as a result of an incident that is taking place in the area of the 800 block of Bedford Street. Police are requesting all citizens to avoid the area from Ninth Street to Eight Street and Cumberland Street to York Street. We are currently investigating a barricaded person. The Cornwall Community Police Service Emergency Response Team and Negotiators are on scene.

Police attended Bedford Street residence shortly after 2:00 a.m. on June 13th, 2012 in regards to a disturbance. Upon police arrival, a 43 year-old lone male had barricaded himself inside the residence. Police have established contact with the male and are currently negotiating a safe exit. It is unknown if the male has any weapons at this time.

The police responded to a noise complaint from a neighbor.   The male refused to speak with police or open the residence.

The police initiated emergency phone calls in the area and door knocked as a precaution.

They are still negotiating as of this update.  No weapons have been visible or verbalized from the male.

CERT Team have deployed DISTRACTION DEVICES which employ CAPS which create loud noises and leak smoke.  There have been no gun shots at scene.

Approximately 20-25 officers have the scene isolated.

Police are trying to get the lone man to communicate with them and end the stalemate in a peaceful and safe manner.

The lone male exited the house.   No injuries and traffic will be opening again soon.

from the Cornwall Police

Cornwall, ON- The Cornwall Community Police Service successfully concluded a barricaded person investigation following a ten and a half hour stand-off. Police had cordoned off a section of the City as a result of an incident that took place in the area of the 800 Bedford Street. Police attended shortly after 2:00 a.m. on June 13th, 2012 with regards to a Domestic disturbance which resulted in a barricaded person. The Cornwall Community Police Service Emergency Response Team and Negotiators attended the scene. Following several hours of negotiations. Police breached the residence and the man was taken into custody without incident. The investigation is still ongoing and charges are pending in regards to the domestic related incident. The male’s name will not be released as it may identify the victim in this incident.

The Cornwall Community Police Service would like to thank the public for their cooperation during this incident.