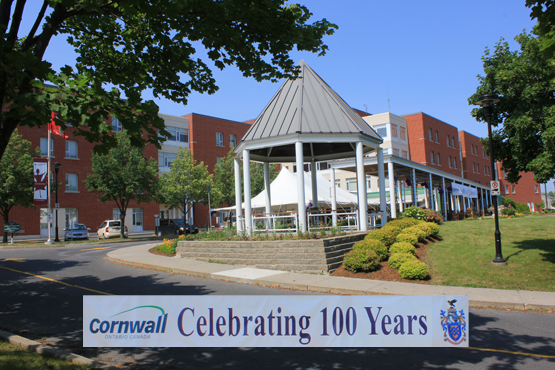 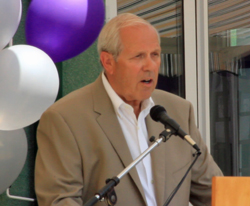 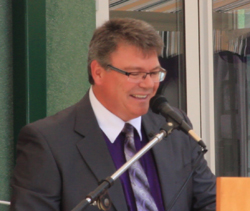 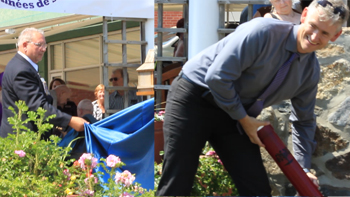 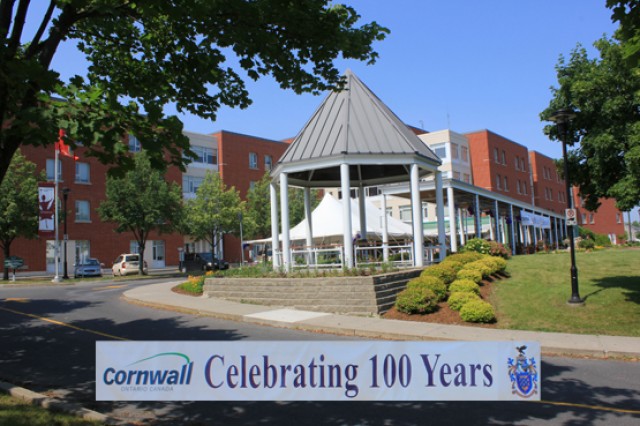 CFN – Over a period of several months, Glen Stor Dun Lodge has been hosting a series of celebrations in honour of 100 years of service to seniors of Cornwall and the United Counties of S.D. & G.

“The Lodge” traces its roots back to the former House of Refuge and Industry, built on 75 acres on 11th St. E. in 1912. At that time the site served the unemployed as well as the sick and the aged. A name change occurred 20 years later: Glen Stor Dun Lodge, Home for the Aged. Residents outgrew that building in 1949. Three years later the new building on Montreal Road opened its doors to the public. In 1994 the newly re-birthed 132 bed facility opened on the existing river view location, and gone were the outmoded eight-bed wards. The current facility is an absolute gem and it is clear that top notch client care is their goal.

Wednesday’s festivities included outdoor speeches and presentations by dignitaries, the unveiling of a new cairn, the placing of a time capsule in

the cairn, a memorial tree planting as well as a wine and cheese in the main dining/common area of the building, with the soothing sounds of music under the direction of Therese Motard playing in the background as guests visited with residents and enjoyed an art exhibit.

Cornwall Mayor, Bob Kilger, thanked Rev. Fred Rennie for his words that:  “remind us of the blessing and the caring attitude that the City of Cornwall and the United Counties are well-known for in caring for the elderly.”  His own mother has been a resident of the facility for almost five years.  United Counties Warden Ian McLeod spoke of the Counties’ active role in establishing the original facility in 1912 and the subsequent official transfer of ownership to the City of Cornwall in 1994 and that today both municipalities share in the operating cost of the facility.

of an apparent acute nursing shortage at the facility. He told us that the whole industry has a shortage of health care workers. When asked if nursing is a good field in which job seekers should become trained, his reply was “absolutely.” We enquired if full-time jobs are currently available at the Lodge: “It’s like anywhere else, the entry is part-time and you work yourself up to full-time.” He compared the situation to those of Cornwall Community Hospital and St. Joseph’s Continuing Care. As for how long on average it takes for a person to make the transition from part-time to full-time, the administrator shared that he’s seen people begin employment and two weeks later become full-time, yet in other cases at the Lodge and elsewhere, after seven or eight years some people are still unable to make the transition. Quenneville reports that bilingualism is good to have, but it is never an issue. According to the Lodge’s website, they are seeking full-time and part-time Registered Nurses.

But, the celebrating isn’t finished just yet. A centennial reunion barbecue will take place on August 18th for present and past employees. And, October 25th is the scheduled date of a celebratory dedication in the Lodge Chapel.