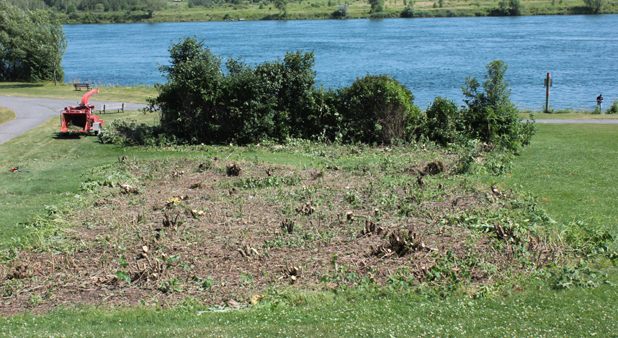 CFN – Preparations are well underway for the 2012 Canada Day Celebrations in Lamoureux Park, but one development may come as an unwelcome shock to some.

There has been a bit of a stir in a particular Facebook group.  A post titled:  “Announcing Cornwall’s ‘DE-Beautify Lamoreux Park’ program. Sad!” caught my eye, but not as much as the accompanying photo depicting an emaciated looking area of Lamoureux Park where just a day before stood well-manicured lilac stands.  The poster, who also submitted several photos to Cornwall Free News, said that:  “workers said it was part of an anti-drug program.”

The online dialogue continued: “The sad part is these were planted in loving memory of departed loved ones by their grieving families and also by Canada Trust Friends of the Environment. It seems to me rather insensitive of the City to accept a gift from the citizens then toss them in the wood chipper. I wonder how the families who looked at them as a memorial to their family members think about the city destroying them? If the city finds druggies in a graveyard will they destroy the tombstones and toss them into the quarry? Same logic.”

In near disbelief, I headed to the city’s waterfront for a first hand look.  I, too, spoke with one of the contractors while they were on a break.  I was told that they’d been advised that the City had wanted to remove every lilac from the entire area two years ago, but lacked the funds at the time.  The worker was of the impression that a few teens had spoiled it for everyone and that by the end of Friday every lilac in that area of the park will be destroyed.  That’s right – not transplanted, not thinned out, not reconfigured, destroyed in a chipper!  Much of that area of the park has already been stripped bare.

Recalling that lilacs were clearly called for in the 2007 Waterfront Plan, I checked out the City’s website and sure enough: Lamoureux Park and The 2007 Plan.  Public Meeting Comments included in the Plan advocate to:  “Move some of the lilac bushes and make available more “romantic” seating throughout the lilac garden.”

What happened to Cornwall’s boast of being the “City of Lilacs”, rivalling Rochester, NY in the size of our collection?

Cornwall’s Lilac Festival is mentioned on this tourism site.

Some smaller ticket items were cut from the budget. They include:

•Communities in Bloom funding for flowers and supplies

•Safety netting around the ball fields at Reg Campbell Park

•A lilac-removal program for city parks

Since it would seem that this item was announced as cut from the budget, I telephoned the Budget Committee Chairman about this.  He indicated that, to the best of his knowledge, the move is solely due to alleged thieves hiding in the bushes after breaking into the marina and elsewhere, but that Parks and Recreation could provide a definitive answer.  We sat on this story overnight in order to obtain a statement from Parks & Recreation.

This morning I spoke with Christine Lefebvre, Divison Manager, Parks and Recreation for the City of Cornwall. She told me that two years ago there was a complaint which they investigated. Inside lilac clusters were found picnic tables, wine bottles, beer bottles, glue packages, and several syringes. Apparently the number of syringes discovered is higher than found in other parks. She described it as a serious situation. At that time the lilacs were cut back & trimmed, but they grew back quickly. A police safety audit was performed. The audit included placing a light to see if it could be seen through the bushses. The ensuing recommendation was to make changes.

Although the details are confidential and not available to Ms. Lefebvre, three weeks ago there was an alleged incident in which a little girl was dragged inside the bushes. It’s unclear where the parent was at the time. Reportedly a lot of children go to the park on their own and some parents drop their children off for a few hours. A lot of parents have been asking for something to be done. There is also concern that it’s not safe for cyclists either, especially for women.

Five break-ins have been reported at Marina 200. Some boaters who rent slips and/or camp there have requested removal of the lilacs. Apparently youth hide in the bushes.

Lefebvre said that there are a lot of red flags, so the department has advised Council that this is a dangerous situation. This clear cutting has facilitated a possible expansion of the nearby play structures in a future budget year.

When asked, she did acknowledge that this item had been removed from budget. The money was found by not awarding a geese dog handler contract. Although massive numbers of trees have been/are being removed, Parks will maintain the lone lilac bed situated along Water Street. They’re not planning to remove some hardwood trees which grew wild among the lilacs and they will add other trees to the park. The landscape supervisor reported that transplanting is a difficult and costly venture.

And what about public consultation and the clearly expressed wishes of the community that the beautiful park remain and not be transformed into something less, as was well-reported here on Cornwall Free News?

Lefebvre is hoping that this is the right decision, saying that:  “This should bring more re-assurance to families.”  Citing safety as always being the first priority, the manager suggested posing the question to the community.

What do you, our viewers, think about this turn of events?