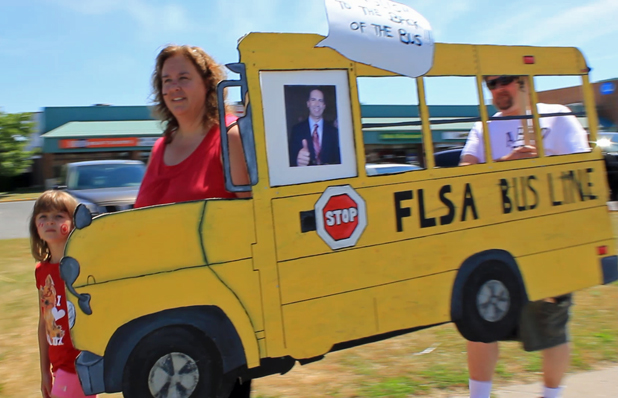 In late May the groups converged in Chesterville, catching James Moore, Minister of Canadian Heritage and Official Languages, quite off-guard.  We covered that story.  That day some members carried a makeshift coffin decrying the (near) death of democracy in Canada.  Today they were sporting a cardboard bus and shouting:  “Back of the bus, English; know your place.”  The groups are drawing attention to the apparent lack of fairness in current language laws, their interpretation and heavy public funding of minority language groups outside of the province of Quebec.  Today, they were specifically pointing out the disparity in funding and access to service, whereby hospitals and clinics are being pushed to be 100% bilingual or French-only, while English-only is no longer an option.

In our video clip you’ll see and hear their demonstration as well as hear from some participants, including a few newcomers.