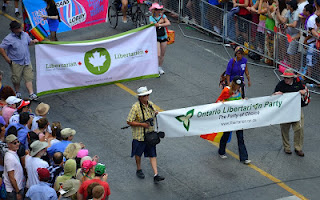 Ontario Party leader Allen Small was there helping to carry the provincial party banner. He commented that he was amazed at the number of people watching the parade.

“This is the kind of audience we should be appealing to, thousands and thousands of very open minded young people, the future of Ontario, perfect,” he said.

The Toronto Pride Parade is one of the largest of its kind in the world, Parade Organizers said that about 158 groups took part this year in the final event of the festival.

Since the time that the Ontario Libertarian Party was founded, some of its members then, and throughout its history right up to the present day were part of the LGBT community.

The Ontario Libertarian Party has been a registered political party since 1975. They advocate property rights, limited government, and voluntary interactions within communities between individuals and groups.