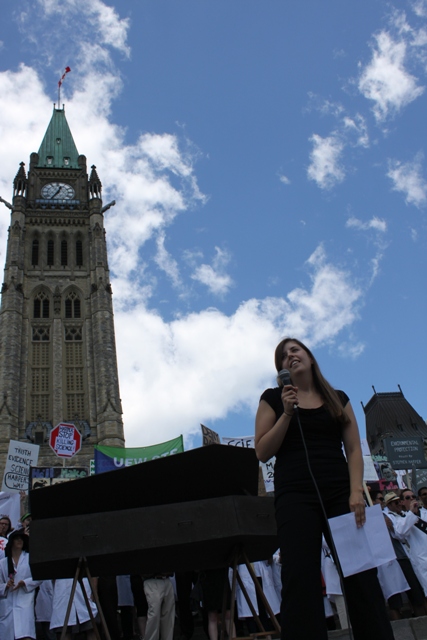 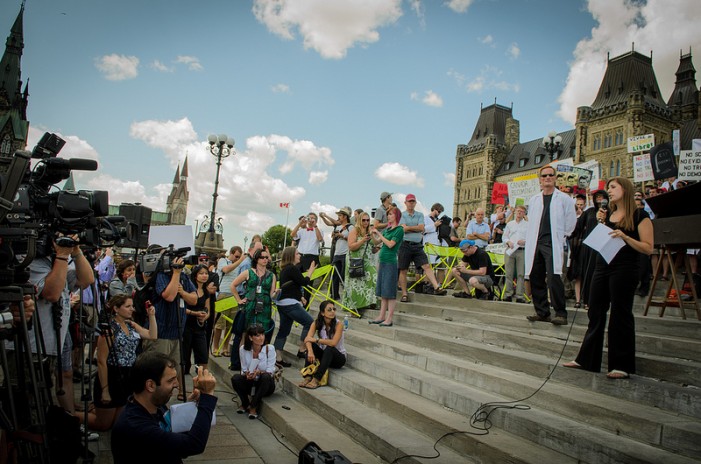 CFN – Katie Gibbs, the young PHD biology student from Ottawa University, is part of the dynamic tour de force behind the July 10, Death of Evidence Rally on Parliament Hill. Thousands of scientists and science supporters rallied to the cry to support science, evidence and our natural world, forming a long funeral march to the Hill. Polluted lakes filled with toxins won’t support life, aquatic or human life. These scientists are committed to bringing the unbiased truth to all Canadians. But does the Conservative government want to hear the truth?

CFN: How did this Death of Evidence rally idea come about?

KG: A number of professors and grad students were at the pub after work on a Friday talking about how frustrated we were with all the recent cuts to federal science programs, the muzzling of government scientists and some of the legislative changes that were part of the budget bill C-38. We realized that the scientific community really needed to speak out so we started brainstorming. We wanted to do something original and visual and eventually we came up with the Death of Evidence funeral procession idea.

CFN: What is your message and do you really believe that Mr. Harper cares and will change his mind?

KG: Our message is that science in Canada is under attack. We weren’t really targeting Harper. Scientists have been writing letters to the current government and getting petitions signed over many of the cuts and the government hasn’t listened. So with this event we were really targeting the public. We wanted them to know what is really going on. These cuts are not just about budget cuts like they keep saying, this is part of a systematic attack on science. They are preferentially cutting programs that may produce results not in line with their agenda. They are also muzzling scientists and reducing the amount of scientific information that is getting out to Canadians. We wanted Canadians to know this and to know just how concerned the scientific community is about this. Because ultimately the government answers to the public, so we need the public to demand that science and evidence be used in government policy making.

CFN: What scientific programs is Mr. Harper gutting and why?

KG: There are far too many examples to mention them all. But a few that I found to be particularly alarming were the mandatory long form census, the Experimental Lakes Area and PEARL. The mandatory long-form census provides data that are used in so many different areas of research along with city planning and policy. And the fact that they decided to keep a voluntary long form census just shows that they don’t really understand the issue and aren’t taking the advice of experts. Anyone who has taken a first year statistics class knows that how you do your sampling affects the quality of the data and having a voluntary census produces data that are basically useless.

The Experimental Lakes Area is a world renowned research facility that studies water quality and fisheries. It is the only facility in the world where we can perform experiments on whole lakes. Results from ELA have directly affected policy decisions before with acid rain research. PEARL which is the closest laboratory to the north pole does important tracking of climate and the ozone layer.

You’ll have to ask Mr. Harper why they are cutting these programs. Our hypothesis is that this is a systematic attack on programs that may produce data that go against their agenda. For example, it’s much easier to do nothing about climate change if you stop monitoring climate so that we have less data showing that the climate is changing.

CFN: What do you hope to accomplish?

KG:We want to make it clear to the public that these cuts to science are not about fighting the deficit, they are a systematic attack on science and a preferential cutting of programs that may produce results not in line with the conservative agenda.

The scientific community is very concerned and we want the public to know that.

CFN: How many people attended the rally today?

CFN: Did you think it would be this successful

KG: I honestly had no idea it would be this successful. I was hoping to get a turnout of 1000 people and a little bit of media attention. So when we got thousands of people and national press coverage, I was pleasantly shocked!

CFN: Is it true that there is no money for these programs?

KG: Like I mentioned earlier, I don’t think this is about fighting the deficit. Many of these programs have very low operating budgets, especially when you consider the important things that they monitor like air and water quality and climate change.

CFN: What programs and institutions is the Harper government gutting and why?

KG: In addition to the ones mentioned above, they also cut the National Round Table on the Environment and the Economy. And they were very clear that they were cutting it because they didn’t like the advice they were giving. That is not right.

CFN: What is next for you and the Death of Evidence group?

KG: We’ve been so focused on the rally that we haven’t really talked about what’s next. But we are sure that there will be more to come. We’ve talked a bit about the need for a science advocacy body in Canada but that’s just an idea at this stage.