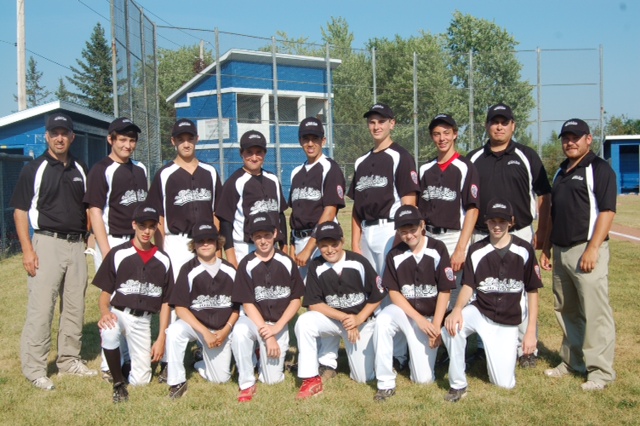 CFN – The road to the national junior baseball championship will travel through Cornwall.

The Cornwall Black Sox will carry the hometown colours as they compete against champion teams from various districts across Ontario, including Oakville, Thunder Bay, Windsor, Brockville, Orleans and East Nepean. The winning team will earn a trip to the Canadian championships in Lethbridge, Alberta.

Cornwall District Minor Baseball President Susan Poirier said the tournament will help to showcase Legion Park, the Cornwall Little League and the entire City. Over 100 out-of-town players and coaches will be taking part in the week-long event, not to mention parents and other supporters that are sure to be in attendance as well.

It will also be a great experience for the 13- and 14-year-olds on the Black Sox roster, who will get to compete in front of a hometown crowd.

“It’s exciting for all of the boys. They’ve never been in a tournament like this,” said Mrs. Poirier. “The teams will be phenomenal.”

The tournament kicks off with a banquet on July 23rd at the Royal Canadian Legion Branch 297. The action gets underway the following day with the first game at 8:30 am, followed by the opening ceremonies at 11 am. The Black Sox will take to the field immediately afterwards for their first game of the tournament.

All of the games will be played at Lutt Bergeron Sr. Memorial Field in Legion Park, at the corner of Race and Marlborough Streets.

Weather permitting, the semi-finals will be played on July 27th at 10 am and 2 pm, with the championship game slated for July 28th at 1 pm.

Residents are welcome to stop by and take in the opening ceremonies as well as the action on the field. A canteen will be open at Legion Park for the entire week of the tournament, and raffle prizes will also be up for grabs.

Officials have been busy planning for the event for several months now, and Mrs. Poirier said she’s been impressed with the support and sponsorships received within the community.

“It amazes me how people have come to the table to help out,” she added.

Cornwall last hosted the Junior Ontario Provincials in 2006, and there have been some great Little League success stories since then. In 2009, the Senior Black Sox won the provincial championships and went on to win the Canadian Little League Senior Baseball Championship in Saint John. The team generated a tremendous amount of community pride as they went on to represent Canada in the Senior League Baseball World Series in Bangor, Maine.